One of the things we did today–it was actually the first thing–was visit Okunoin cemetery. There are over 200,000 gravestones here, and that’s not counting all the smaller, anonymous ones that have been buried over the centuries. The oldest monuments date back to the 11th century, and there is a newer area, where contemporary companies also erect monuments. [Some of the older ones in particular are just monuments–the people are actually buried somewhere else; but because of the holiness of the site, they wanted a monument here, too. The newer ones, however, typically do have the cremated ashes of family members and/or company workers.]

The main draw of the cemetery, however, is Kobo Daishi’s mausoleum. Shingon Buddhists believe that Kobo Daishi isn’t really dead–instead, he entered eternal meditation in 835 [when he was 62]. Thus, he continues to be active, watching over the world with compassion. For this reason, twice a day, monks bring food to his altar and set it before him. The food is cooked in a special kitchen, and there is a place where people can bring food offerings that will be prepared for him. The picture below of the monks carrying the box was taken when they were bringing him his breakfast!

Overall, what I loved most about the cemetery is the way it harmonizes with nature: the area is filled with enormous Japanese cedars, the oldest of which is 750 years old. They are gorgeous, and the monuments are just kind of tucked in around them–the older ones are covered in moss, which looks so beautiful.

So, below are some random pictures of the cemetery. In addition to the ones I just described, you’ll find the following [in no particular order–as I’m sure you have noticed, I can’t figure out how to make my “blogger” app actually order the pictures the way I want them!]
*In addition to offering food to one’s ancestors, beer and sake are also commonly seen–someone tell Rick Carlson & Brooks Schramm about this!
*Look, it’s a gravestone for a fish! This monument was put up for fish, by a fishing company [Buddhists believe in the potential Buddha nature of all sentient beings]–apparently, workers from the company, fish, and those who have died eating puffer fish, which are poisonous, are all buried there. Someone tell Maria Erling about this!
*This monument was put up to honor those animals who were killed during animal testing–again, by another corporation. Notice the animals around the Buddha’s feet. I liked this one!!
*All over the cemetery are these little images of Jizo, a bodhisattva believed to watch over children in the afterlife. The bibs are placed on these images by those whose children have died, in hopes that Jizo will watch over them; sometimes the bibs also serve as prayers for long life for the children one does have.
*Look, it’s a gravestone for a coffee cup! No, no coffee cups are buried here, but this is the monument of a coffee company. You can’t see it in this picture, but there is actually darker stone inside the cup, so it looks like it is full! I love it!
*This stone by which I am standing is the largest monument in the cemetery, dedicated for a deceased wife by her husband. It is a very common shape that is found throughout the cemetery: it is a five-tiered stupa, and the Sanskrit letters engraved on each stone shape represents one of the five elements taught in Buddhism. From the bottom up they are: earth, water, fire, wind and space.
*Look, a dog! Indeed, this is a monument to someone’s dear, departed “Henry.” Speaking of dogs, because of the legend that says two dogs led Kobo Daishi to Koyasan, dogs are highly regarded here–one woman was even walking hers in the cemetery.
*Look, it’s a monument to Apollo 13! The company that built this monument used to make airplanes for the Japanese in WWII. After the war, they erected this monument, to symbolize the great power that humankind has–we can even go to the moon–but to remind us that such power must always be used for peace.

I could have spent hours and hours here–it was really beautiful and serene. 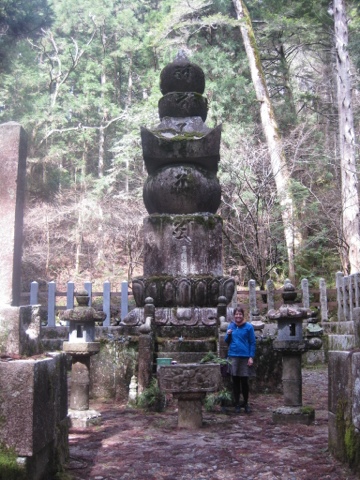 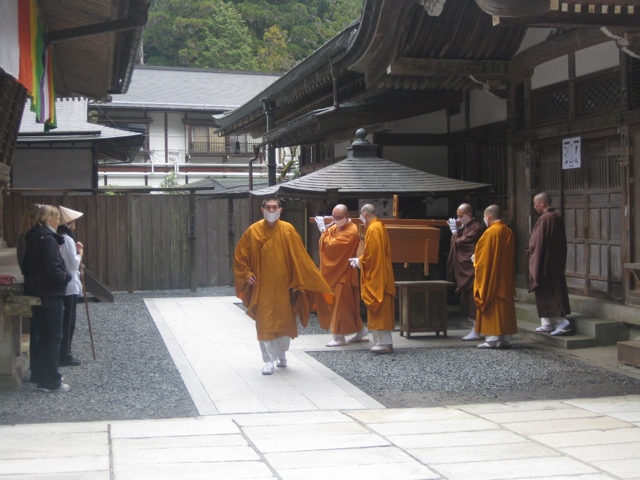 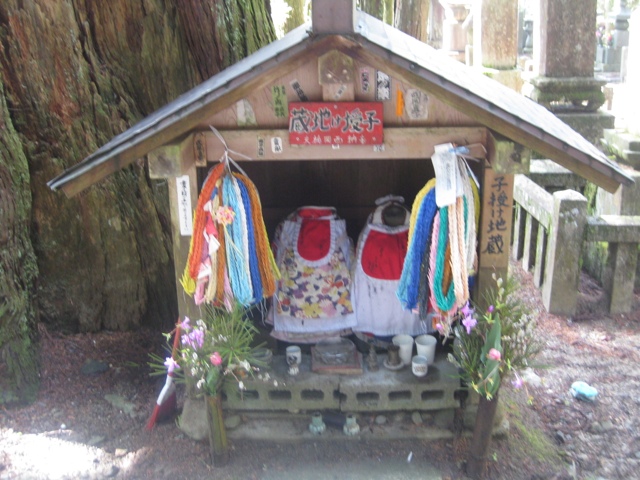 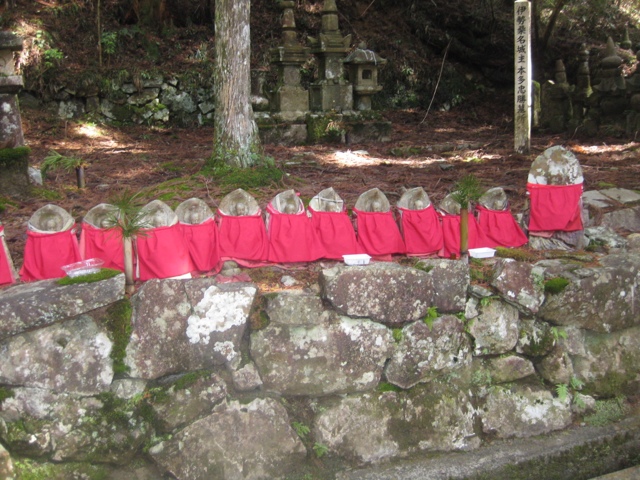 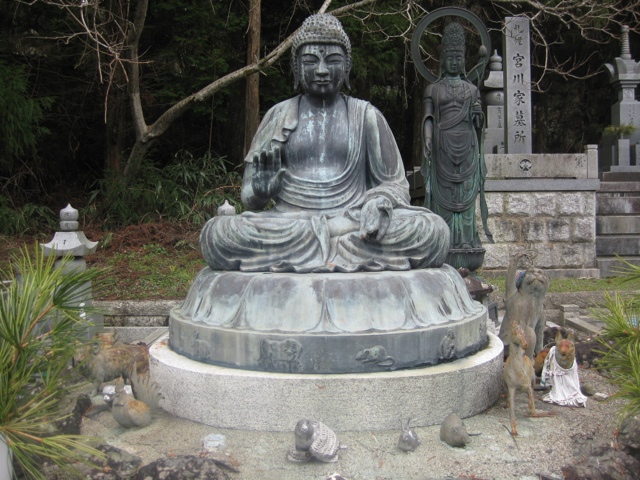 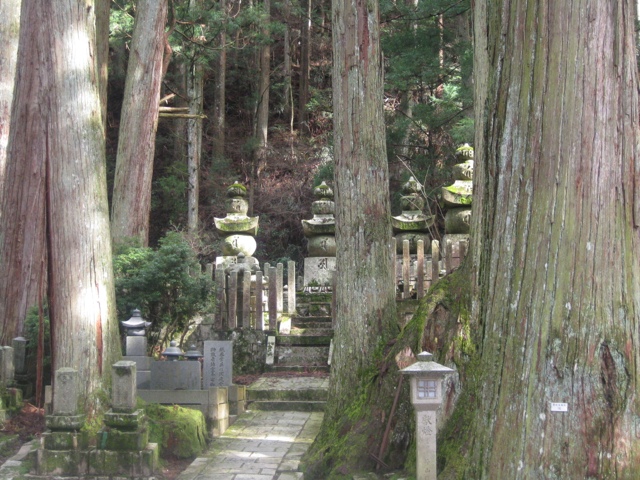 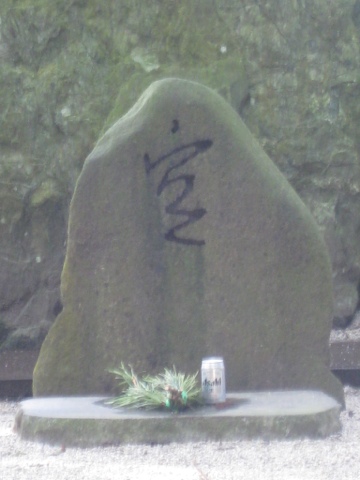 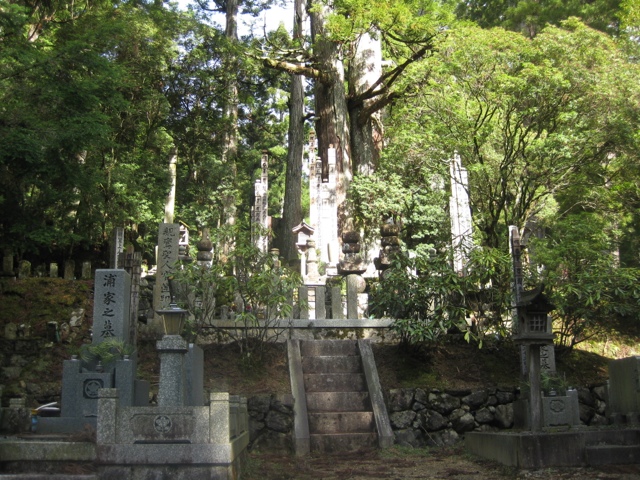 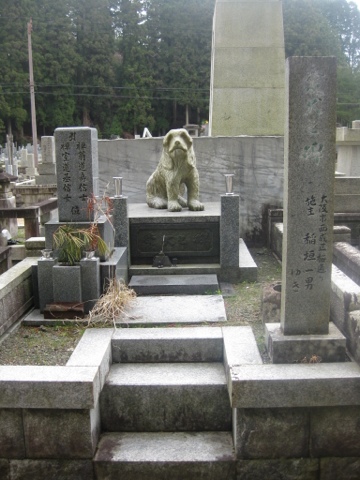 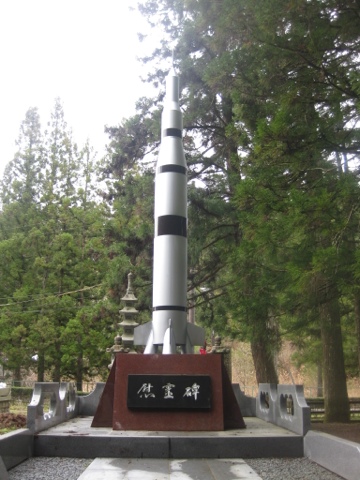 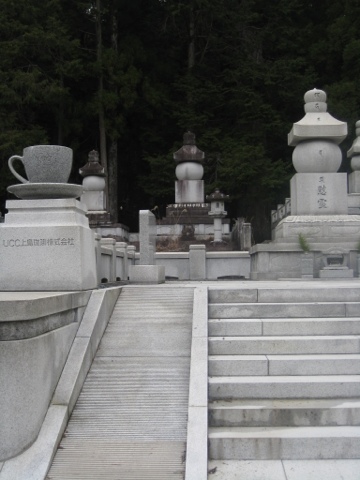 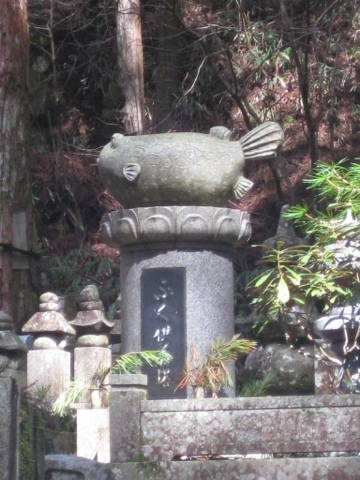 One thought on “A Cemetery Worth its Own Post”