So, I woke up to a lovely little surprise today–the internet in the hotel is working! So, I am writing this post from the little desk in my room. Very nice! After this trip, there are so many little things that I will never, ever take for granted again!

Since I wrote such a long post yesterday, I will keep today’s short, and just talk a little bit about what it is like, walking along the Ganges. First, let me say that life in Gettysburg does not prepare one well for Varanasi: every time I step outside my hotel I am on complete sensory overload, every sense swamped with data–smells, sights, sounds, etc. Everywhere I go I am in a crowd of people, and the concept of “personal space” quickly loses its meaning. I can last about 2, 2 1/2 hours, then I’m shot, and I need to crawl back into my hotel room and regroup. I simply am not capable of processing it all beyond that. So, I am taking everything in small doses, and getting to know the city in baby steps.

Walking along the Ganges, you walk up and down steps, from one ghat to another, passing dogs, goats, cows, and all manner of people–people selling things, holy men saying prayers, women laying out laundry [more about that in a moment], children flying kites [plastic bags formed around sticks, from what I could tell], and boys young and old playing cricket. The sun beats down, so it gets hot really quickly. I can’t imagine what it is like here in the summertime. And, of course, you pass beggars. The country of India alone holds 1/3 of the total population of the world’s poor, and so in a city of this size, you know you will be surrounded by beggars, and it feels incredibly hard-hearted to just ignore them and walk past, especially the toddlers who are here begging with their mothers. But that’s what I do: it would be the kiss of death to open a wallet in that situation–or hand out anything, for that matter–because you would be swarmed in an instant with others wanting something, too. So, I don’t look at them, and I keep walking, even when the children walk with me for a few paces, holding out their bowls and asking for a few rupees. It doesn’t feel very good, but I am afraid of what might happen if I reward persistence. This, dear students, is a classic example of structural sin, in which I am both an active and passive participant.

It is the river itself, of course, that is the focus of everyone’s attention. I said already that the Ganges is polluted: the primary cause, however, is not the acts of individuals [which is the source of only 5% of the river’s pollution] but instead the raw sewage that flows directly into the river from 32 different point sources in Varanasi alone [to say nothing of the other 116 cities on the Ganges, all of which also dump raw sewage into it]. I also said that there are individuals and organizations working hard to clean it up–a heroic but absolutely critical task, given everything that takes place in this river. If you didn’t know better, you would assume that the river is perfectly clean from the way people use it.

So, what happens in the Ganges? Everyday, throughout the day, but particularly in the morning, hundreds and hundreds of people come to bathe. The men strip down to their underwear, the children go naked, and the women stay in their saris. They submerge themselves fully, lather up with soap, and proceed to wash themselves vigorously, including their faces, including their mouths. They even shave right there: one guy I saw today had a mirror and was combing his hair, too, just like he was in his bathroom at home. As I was watching, I couldn’t help but think : how clean can you can get, when the water you start with isn’t clean? [It’s a great metaphor, right?] But, the practical fact is, dirty water is better than no water, and for many people, this is the only water they have available to them. The children actually seem to really enjoy the river–jumping off the steps into the water, swimming around, dunking each other, just like at the beach.

Then, right next to the bathers are people doing laundry. Some people just wash out clothes with their hands, but there are also many places with flat stone rocks on which clothes are slapped and rubbed with soap–these, I assume are the dhobis, the professional laundry workers. They do the laundry at almost every hotel in India, and they also do laundry for other people in the cities, too. Once the clothes have been “washed”–again, I use the term loosely–some of them are hung from poles or lines, but others are simply spread out on the ground to dry–the same ground on which the goats/dogs/cows poop, people spit, blow their noses, etc. This seems to defeat the purpose.

Then, right next to the people doing laundry are the people washing their buffalos. The buffalos really seem to love the water–of course, they are so hot! There was one place in particular that had an especially large sand area that could accommodate lots of animals–the owner(?) was in the water with them washing them off, too. [What I haven’t seen are any dogs in the water–I think they know better–although they certainly are not above scavenging the trash that coats the riverbank, and I’m sure they must drink it].

I also saw some women collecting river water into plastic bottles and jugs. This, I must say, was pretty disconcerting: I can’t even begin to describe the color of the water, which, if you had seen it, you would have guessed a hundred different liquids before imagining that it could be water, since water is, of course, clear. This was not. I kept wondering to myself–what are those women going to do with that water? Drink it? Cook with it? I tell you, there aren’t enough iron pills in the world to purify that water, nor enough heat to boil it clean.

Finally, in the midst of all of this are the places on the river [they are called the “burning ghats”] where cremations take place. Having now seen first-hand several cremations, I will say more about that in another post–here, let me just say that not 10 steps from where bodies are being cremated, people are bathing and doing laundry.

Like I said, those people who are working to clean up the Ganges have their hands full!

Just a quick note: for those of you who are interested in politics, I would like to report that they just had elections here–but it will take until March 6 to count the ballots. Casting ballots is old school here, they mark your index finger with permanent black ink, to indicate that you have voted! 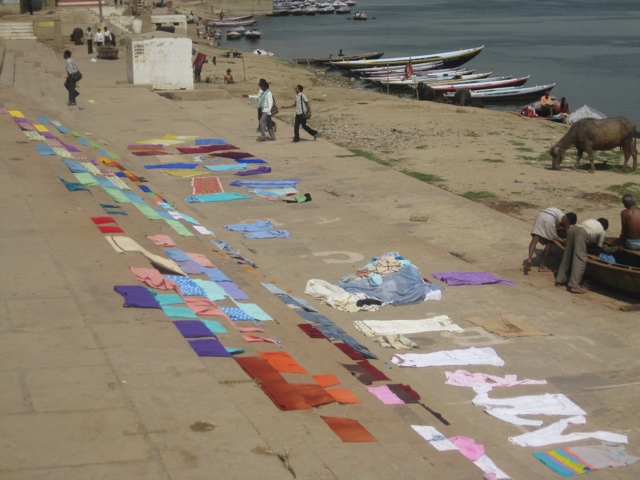 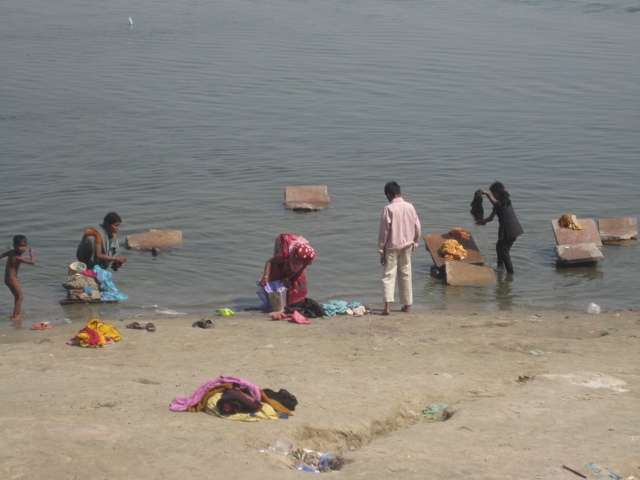 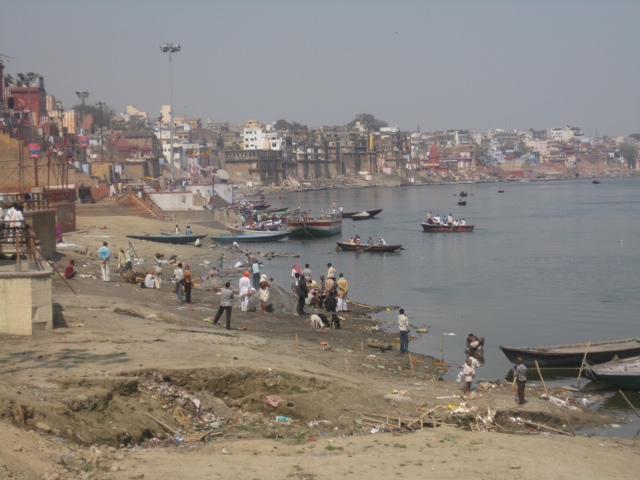 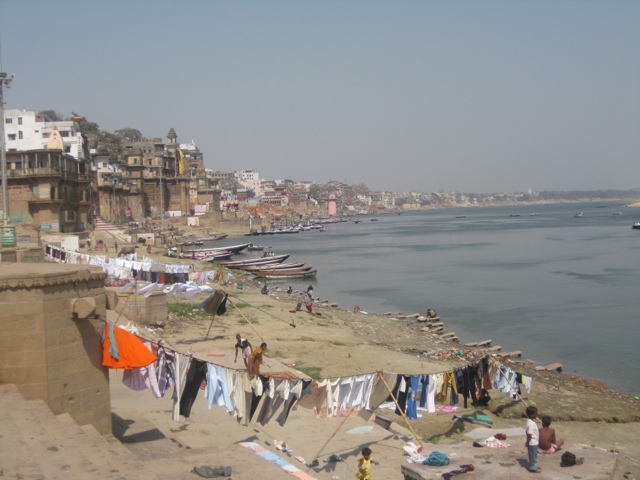 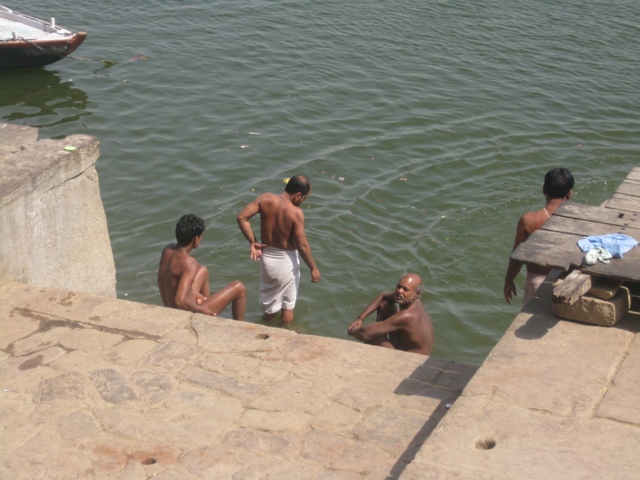 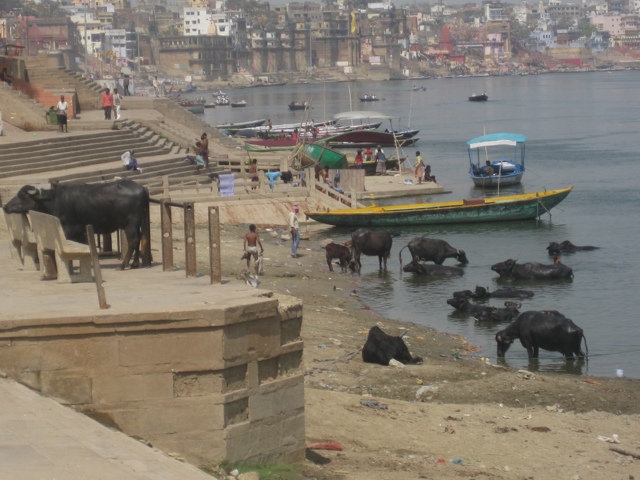 2 thoughts on “A Walk Along the Ganges”