It is Saturday morning and I am here at the “Open Hand”–it’s me and about a dozen hippies from all around the world. Seriously, I feel like I am back in Boulder, Colorado, again–and, I must admit, it is a great feeling! I ordered breakfast, including an enormous cappuccino, and I am going to write my post for today. And, I should say, this will probably be my last post for the weekend: “Open Hand” is closed tomorrow, and I am not one bit confident that the wi-fi will be up and working at the hotel tomorrow! This little place feels like a godsend to me, so close to my hotel.

This is what I wrote last night, after I got settled in my room:
I am back at my hotel tonight, and I thought I would say a little bit about Varanasi for those who have never heard of it, and wonder why I am spending more time in this city than any other city I am visiting on my trip to India. Basically, Varanasi [which used to be called Benares] is one of the holiest cities of Hinduism. It is right on the banks of the Ganges, which is the holiest river in India. The Ganges is believed to be a goddess, and washing in her waters is believed to be purifying. In fact, Varanasi is so holy, Hindus believe that if you die here, you achieve “moksha”–that is, liberation from the cycle of birth and death. The river is lined with ghats. A ghat is a place of worship–a long set of stairs descending down to the riverbank, where people can offer puja [prayers and/or offerings of fruit, incense, etc.] and bathe in the water. [Let me just say for the record right here that nothing is getting me into that water–even for the sake of research and cross-cultural immersion! Regardless of what many Hindus believe, the Ganges is dangerously polluted. Many Indians recognize this, of course, and are working to clean it up and raise awareness of the dangers. The trouble is that many pious Hindus believe that the purifying power of the Ganges is absolute; and that, as a goddess, she simply can’t be polluted–or polluting.] One of the reasons for the pollution is that another thing that happens at the ghats are cremations–the ones used for that specific purpose are called “burning ghats”–cremations happen in public there, and you can see funeral processions winding their way through the streets regularly [so I hear]. This just one more place where the caste system is alive and well–it is, of course, polluting to touch a dead body, so it is the particular Dalit caste known as “doms” who carry the bodies on stretchers to the river.

Anyway, there is a long series of ghats on this side of the river–one, the Assi Ghat, is a mere stone’s throw from my hotel. By the way, if you are interested in reading/learning more about Varanasi–from a Christian perspective, even–check out Diana Eck’s book, “Encountering God: A Spiritual Journey from Bozeman to Benares.” She writes very compellingly [in an engaging, clear way] about her experience here, coming from a strong Methodist background. She teaches at Harvard and heads up their Pluralism Project, which is a great source of information on different religions in the United States [www.pluralism.org–I think that is the right link: I am a little hampered without the internet.]

Speaking of being without the internet, this is actually a pretty interesting experience [and by “interesting” I mean “disorienting and crappy”] in and of itself–to be “down,” so to speak. I mean, I have a Blackberry and an iPad, so I am basically always connected; and I have to say, I have gotten really accustomed to it: not only do I miss being able to look up any random point of information quickly, I also feel much more alone without having on-demand access to email–everyone feels much further away. Maybe this isn’t such a bad thing–I suppose a little technology fast won’t hurt me; but I don’t have to like it, I’ve decided. I’m still holding out that the hotel will get their wi-fi service fixed tomorrow!
[Oh, but wait–perhaps I won’t hold out too much hope: the power just went out in the hotel! Glad my iPad is charged–ooh, there it is back on again! I’m not sure this bodes well for my stay….]

OK–back to today. The very brief power outages continued through the night–never lasting very long, only enough to make me nervous! But now do you see what I mean about not holding out much hope for the wireless service in the hotel?!

I wanted to say a little bit more about my wrestling with the grinding poverty here. Because I am an academic, when I need to process something, particularly something that I am struggling to understand, I very often turn to books–and this time was no different. Before I left home, I downloaded “Behind the Beautiful Forevers,” by Katherine Boo, which is the story of a group of residents in one particular slum near the Mumbai airport called Annawadi. [The title of the books comes from this enormous sign behind which Annawadi is found: it is an advertisement for an Italian tile company, which promises that the tile will be “beautiful forever.”]. Boo herself is a prize-winning journalist, who has spent the bulk of her career researching poor communities in the United States–specifically WHY they are poor: the socio-economic conditions that both perpetuate poverty and enable people to get out of it. So, in the author’s note at the end of the book, she talks about wanting to bring this same lens to an Indian context–in no small part because she married an Indian man, and “gained a country,” as she says, and she wanted to know that country better.

Anyway, I started the book on the plane ride here, and simply couldn’t put it down–I stayed up last night to finish it. I loved it so much, even though, again, the story itself is brutal [A disfigured woman sets herself on fire, hoping to accuse the family next door, whom she hates. She ends up dying–for want of simple medical care–and the father, the son, and the daughter end up in prison.], the people who live there have brutal lives, and the depth of the corruption of EVERYONE–the people themselves, the police, the medical establishment, the government, etc., etc.–is beyond brutal. The reason why I loved the book so much is that I totally resonated with what she said about writing the book: she talked about wanted to get beyond the “poignant snapshots of Indian squalor” and ask after the “infrastructure of opportunity,”–“whose capabilities are given wing” and “whose capabilities are squandered. She lived with the people of Annawadi for three years [and, incidentally, she tells this great story of how she decided she could handle the conditions after tripping over an unabridged dictionary in her Washington DC apartment, falling and breaking three ribs and puncturing a lung. She figures if she can’t handle the safety of her own home, she might as well go somewhere else unsafe, but where at least she will have meaningful interaction!], and meticulously researches every event that happens, using video, checking and cross-checking facts and documents, and interviewing witnesses.

I think that one of the reasons I appreciated reading the book so much, after what I have seen thus far, is that it helped me, too, to get beyond “snapshots of Indian squalor,” and think more deeply, and with more nuance and substance, about the poverty here. Also, reading about these specific people gave what I have seen a name and a face, which made me feel like I have a more concrete way of describing the conditions of the poverty here, and a more informed understanding of the “why” of poverty here: the heart of that is the widespread corruption, as I mentioned above: corruption that demands one pay policemen to look the other way when scrounging for garbage, pay government officials in order to facilitate a loan, and even pay doctors for medical care.

Here is the million dollar sentence, as far as I am concerned: “The effect of corruption I find most under-acknowledged is the contraction not of economy possibility but of our moral universe.” She talks about being struck by the “ethical imagination” of children–not just in India, but in other communities she has worked with–even living in dire situations where selfishness would be an asset. She notes how they are not necessarily in a position to act on those ideas, and by the time they are adults so many of them, in the face of the death of a friend or community member, simply shrug, or turn away. What has happened? She concludes that it is the result of living daily under savage conditions that have “sabotaged their inner capacity for moral action.” This explains why neighbors in the Annawadi slum would turn on each other, exploit each other, and step on each other to get just a little bit ahead themselves. She writes, “In places where government priorities and market imperatives create a world so capricious that to help your neighbor is to risk your ability to feed your own family, and sometimes even your own liberty, the idea of the mutually supportive poor community is demolished.”

It reminded me of something a dear friend said to me as we were talking about my upcoming travels, specifically my next trip, which will be to Japan. He said, “Honesty is the luxury of the rich, and the Japanese are a very rich people.” I wrestled with that for a long time–you could take it to mean that somehow the poor are inherently dishonest [not true] or that the rich are inherent honest [even less true]; but instead, in light of Boo’s book, I think he was pointing to the fact that people who are wealthy enough to afford the necessities without worry have the luxury of making moral choices, when those who are literally starving and who are surrounded by exploitative circumstances simply don’t have that luxury–they are too worried about surviving.

OK–I am going to stop now, but if you have the chance, pick up the book. It is really a fabulous, engaging read. Thanks for reading, and thanks for thinking about these difficult issues with me.

Here are some views of the Ganges, as well as my hotel. 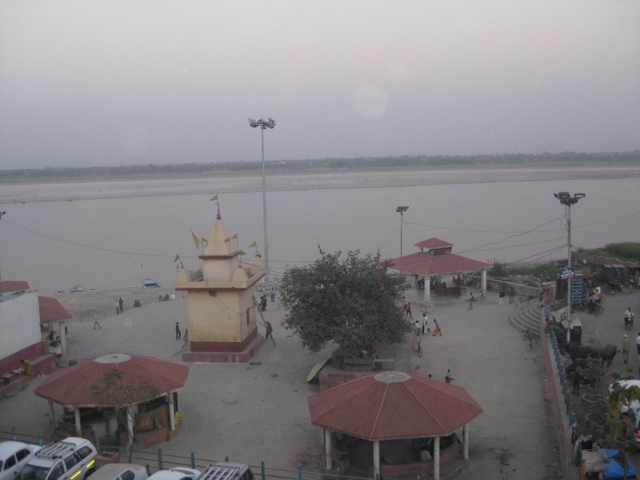 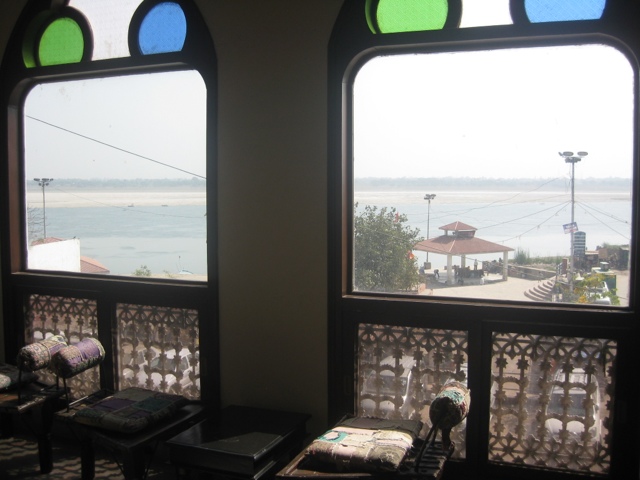 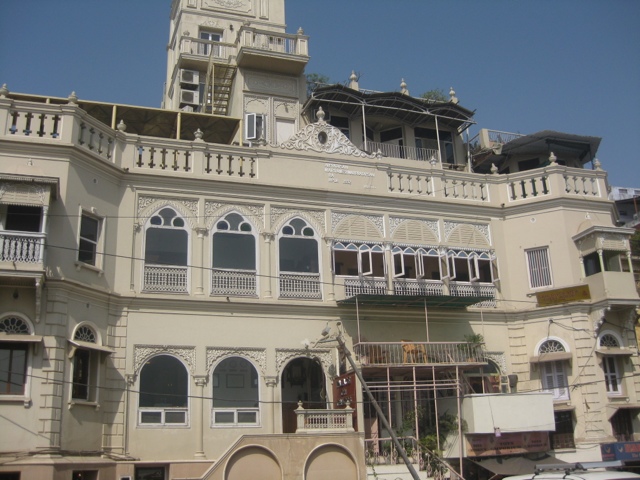 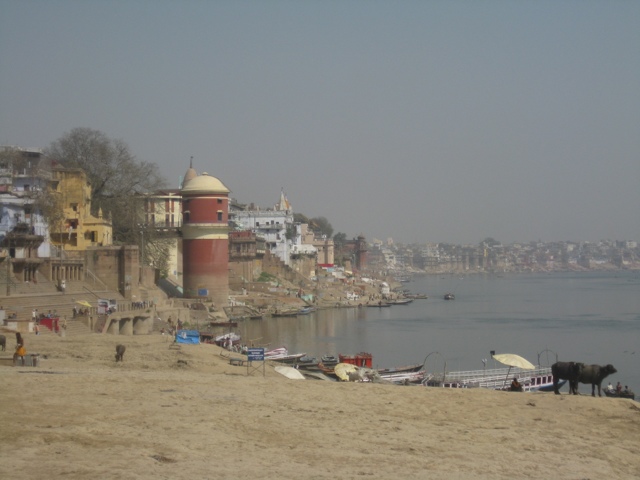 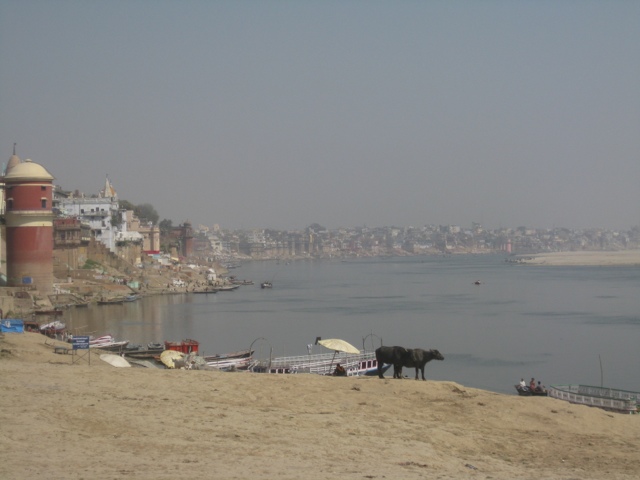