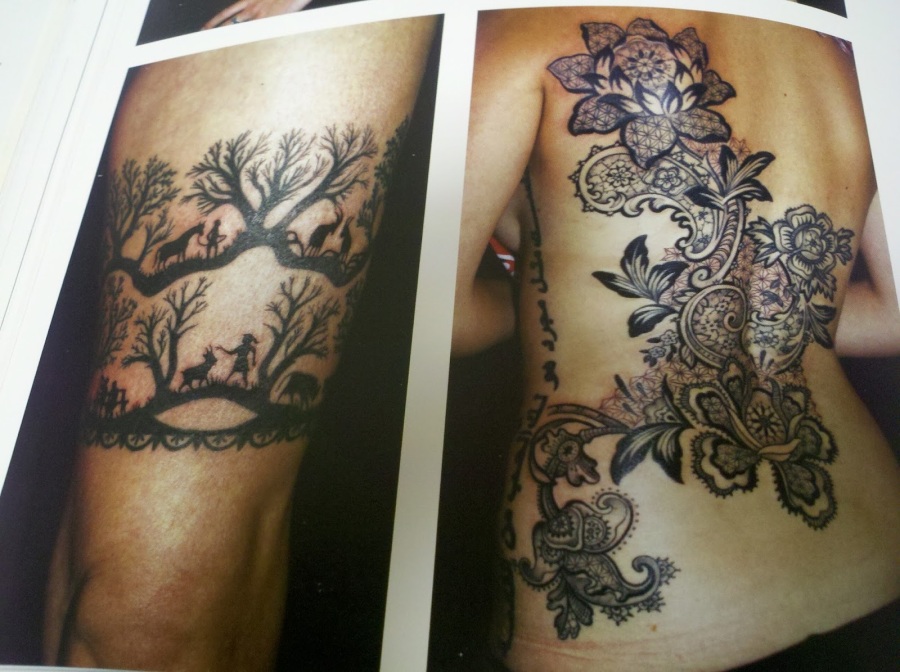 While I was visiting my cousins in Sweden last month [spent Midsummer with them–it was such a great time!], I briefly met my cousin Kenny’s new girlfriend, Josefine–he is quite besotted, which is really sweet.  I had seen her pictures before, so I knew that she is not only beautiful, but she also has lots of tattoos, and we talked about that a little bit:  Kenny doesn’t have any, but he likes that she likes them–they are an expression of who she is–and that she is so open and non-judgmental (she doesn’t care of someone does or does not have tattoos, and she doesn’t want to be judged for having them, either).  I understood what he meant.

Anyway, shortly after I came home, I ran across this book:  Bodies of Subversion:  A Secret History of Women and Tattoo [http://www.amazon.com/Bodies-Subversion-Secret-History-Tattoo/dp/1576876667/ref=sr_1_1?s=books&ie=UTF8&qid=1375814485&sr=1-1&keywords=bodies+of+subversion], and since I had just been with Kenny, I ordered it through our library so I could check it out.  I have to say, I thought it was really, really interesting [and, OK, I have to admit–even though I don’t have a tattoo, I’ve always kind of liked them–and I think the beautiful, colorful ones are really lovely].  Here are a couple pictures from the book: 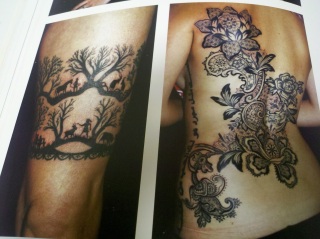 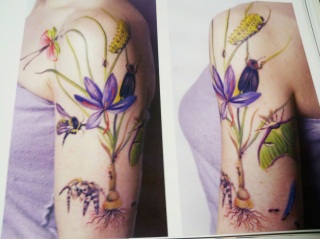 Listen to the opening paragraph:  “In a culture where surfaces matter, skin, the largest organ, is the scrim on which we project our greatest fantasies and deepest fears about our bodies.  Expose too much of it, and religious fundamentalists will come after you.  Pierce or brand it, and you assume the uniform of the counterculture.  Nip and tuck it through surgery, and your drink from the fountain of youth or buy into the beauty myth.”  [Interesting to link tattoos to plastic surgery, no?  I wonder if they do stem from similar impulses…]

So, of course, much of the book is about women’s bodies [a topic you know I find theologically rich and important!], and the way tattooing can be a way for women to claim their own bodies–and how the meaning and role of tattoos has changed over the years.  Again, the author:  “Tattoos appeal to contemporary women both as emblems of empowerment in an era of feminist gains and as badges of self-determination at a time when controversies about abortion rights, date rape, and sexual harassment have made them think hard about who controls their bodies–and why.”  Clearly, there is something to this idea:  the author notes that for the first time in history, American women are more likely to get tattooed than men–23% of women have tattoos, compared to 19% of men [according to a 2012 poll].

As I got to the end, I came across a picture of Nadia Bolz-Weber, a Lutheran pastor who has lots of tattoos, including many with theological significance.  [Here is the picture from the book–I can’t get it to flip, but it’s a great view of Mary Magdalene!:] 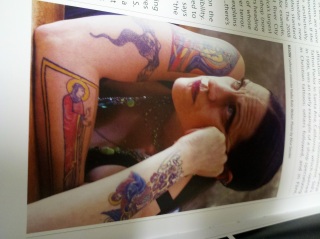 This is what she says about herself, and her tattoos:  “A core belief of Lutherans is that everybody’s 100% sinner and 100% saint.  The whole theological system within the Lutheran system is based in paradox.  I’ve been clean and sober for 20 years, but definitely have a dark, sort of difficult past and still to this day struggle with the truth and reality of the fact that I’m not that nice of a person. I’m a pastor, but I’m not that nice.  I’m kind of an asshole.  But everyone has that reality within them.  I think naming that reality is very inviting to people.” For Bolz-Weber, her Christian tattoos [which include the figure of Lazarus being unbound, Mary Magdalene announcing the resurrection, and depictions of the entire liturgical year on her left arm] are a way of making her own choices around beauty–and also a great way of creating “cognitive dissonance,” and engaging people, confounding their expectations of what pastor should look like.

Anyway, the book was interesting, and opened up for me a new way of seeing women’s bodies, and thinking about how women view, adorn, and proclaim themselves–making the interior exterior, as were.