The day dawned clear and beautiful in Istanbul today, so I spent the morning wandering around Sultanahmet a little more, visiting a few more mosques and also the Istanbul Crafts Centre: that was really interesting, because you can actually watch the craftsmen & women at work—making traditional dolls, porcelain, calligraphy, etc. It is housed in a former Qur’anic college, too–a very beautiful space.

Can you stand a short digression? I have been thinking about traveling, in general. Obviously, this trip I chose to spend all my time [almost 2 weeks] in Istanbul–one city, one hotel–instead of visiting a variety of places in Turkey. By contrast, of course, when I went to India, I visited a total of 5 cities, plus a few side trips. It’s always a choice, isn’t it, when you travel: do you try to see as many different places as possible, knowing that you will only spend a short time in each place; or do you see fewer places, knowing that you will be able to stay longer and get to know the place better? There are pros and cons to each, of course, but I am finding that I am really enjoying this deeper and more nuanced experience of Istanbul, and I am not at all regretting my choice to focus on only one city. I am now getting around easily without my map [oh, don’t get me wrong, I’m still getting lost–it’s just that I can find my way back without the map!], and I have moved beyond the tourist highlights and I’m now seeing the less-trafficked parts of the city. I’m finding shortcuts. I’m feeling the rhythms of the day here.

All of this reminded me of a book I read a long time ago [and I hope I haven’t already mentioned it at some point in the blog–I may have], by the philosopher Isaiah Berlin, called “The Fox and the Hedgehog,” after the fable [The fox brags about how many different strategies he has for avoiding the lion, while the hedgehog confesses that he has only one–however, that one is always successful. When the lion approaches, the fox spends so much time trying to decide which of his many tricks to use, while the hedgehog curls up into a ball and rolls to safety, that the fox gets eaten.]. Berlin’s point is to compare different thinkers–putting some into the category of hedgehogs, those who view the world through the same lens, the One Big Idea, and others into the category of foxes, those who are interested in a wide variety of experiences and theories, all of which are not reducible to one single idea. [For example, Plato is in the former category, and Aristotle is in the latter.]

The whole point of Berlin’s argument is to analyze Tolstoy, and Tolstoy’s view of history–the question being do you judge history through the actions and lives of the “great men” [and typically they are men]–the emperors, the generals, the kings; or do you look instead for the anecdotal, the personal, the mundane–recognizing that history is much more complicated and messy when seen through the eyes of the peasants, the soldiers, and the commoners.

I have been thinking about this as I have been trying to get a feel for these different cultures and different religions as I travel. When you are in a foreign place, you can’t help but be drawn to the large and the famous–but if that is all you see, you end up painting in generalizations with a pretty large brush, which leaves out some of the particularities and the complexities. But it isn’t easy, when you are a stranger, to know what the particularities of any given place are, and even less how to find them. Staying in one place for a longer time, however, does better lend itself to that search–and for me, that is part of the justification for focusing this whole sabbatical project on cities, rather than countries.

Reading this over, I’m not sure all this makes sense; however, I am convinced that this idea of knowing less about more vs. knowing more about less is important, especially when it comes to interreligious dialogue. How much can I know about “Hinduism” as a whole? Should I instead just try to know as much as I can about Krishna? I always struggle, trying balance those things–what I really want is to know more about more!

OK–well, as a reward for reading through that rather dull and confusing aside, let me tell you a little bit about the Grand Bazaar, which is where I spent my afternoon. It is really indescribable; and I think a better name than “Grand Bazaar” would be the “Holy-cow-never-ending-how-the-heck-do-I-get-out-of-here” Bazaar. It’s crazy: not only is it enormous, but you are always and from all sides beckoned–“hello, lady, excuse me, lady”–to look, stop, come in, shop, and buy. Keep your eyes forward and keep moving, I say! The other issue is that bargaining is expected, and I am sure no one on the planet is worse at haggling than I am. I have no ability in this area whatsoever: I found this out in Jerusalem, and I have to say, my skills have not improved since then. One of the problems is that the whole idea is contrary to logic, I think: what is wrong with just marking something with a fair price and charging it? Why is it my job as the consumer to tell you the seller what you should be charging? If it’s too much, I won’t pay it, and you can either look for another consumer or mark it down. Why do I have to go to the work of charming/bullying/wearing you down, as I try to determine the point at which we both win–you make money and I get a good deal? And, why should I be rewarded for being bossy or demanding, when the person after me, who might be shy, ends up paying 20 lira for the thing I just bought for 10? Honestly, the whole thing just exhausts me. Also, when the exchange rate is so in our favor at the moment, I feel guilty about bargaining: really, am I supposed to haggle over something that is already priced at the absurdly low figure of 1 lira? How much does it cost people to make these scarves, anyway? Is 10 lira an insult?

Well, now I can say that I have “been there, done that” and I won’t be going back! [Although I must admit to really enjoying just seeing everything that is available for purchase: shoes, underwear, kitchen items, food, designer knock-off purses, carpets, jewelry, CDs, etc., etc, etc. If you want it, you can find it here!] 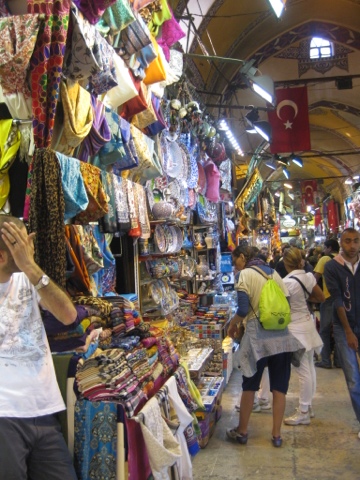 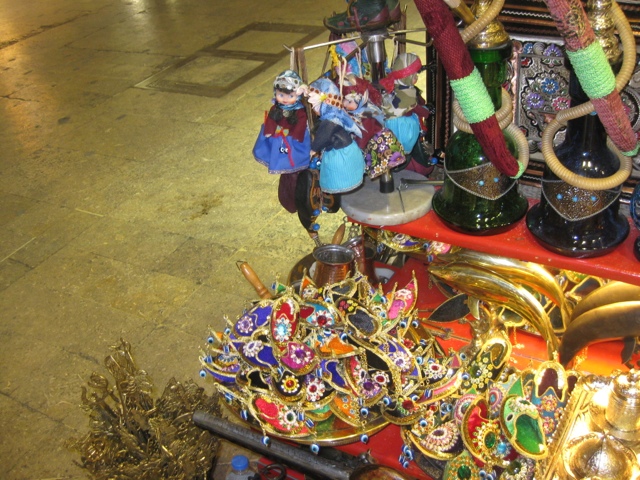 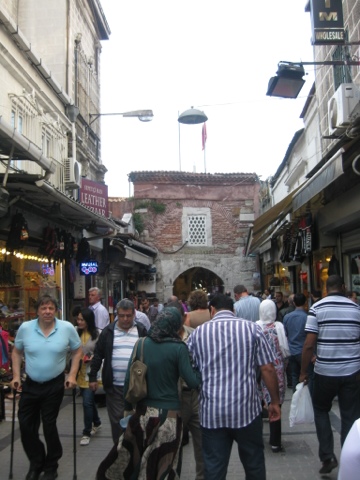 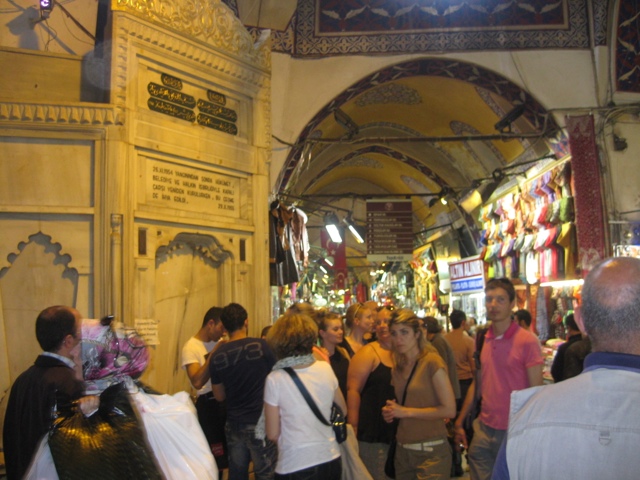 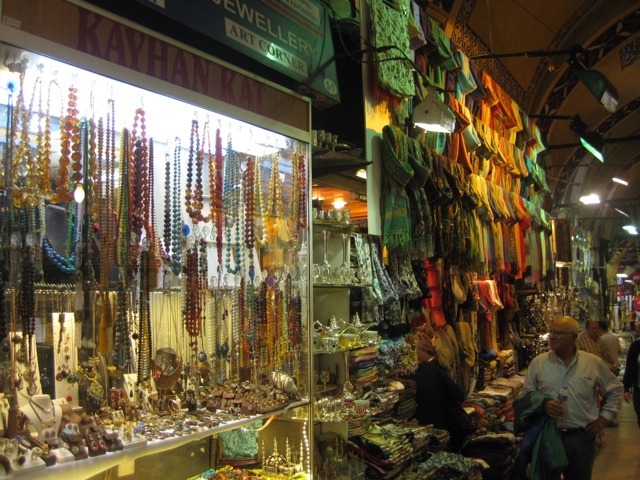 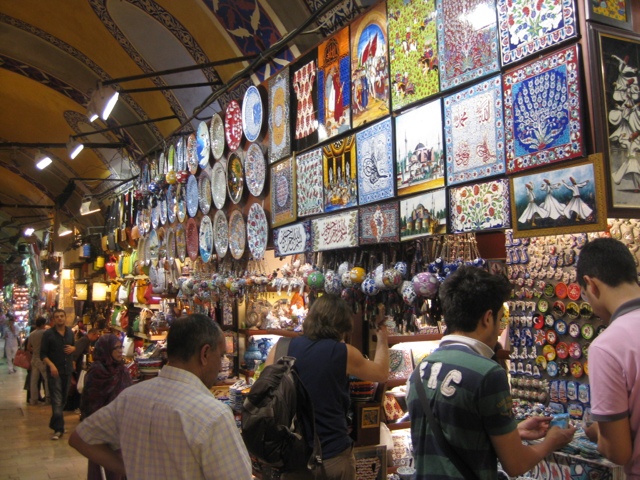 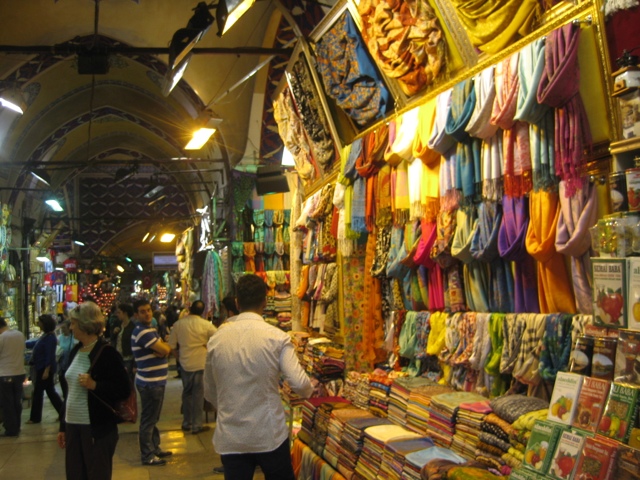 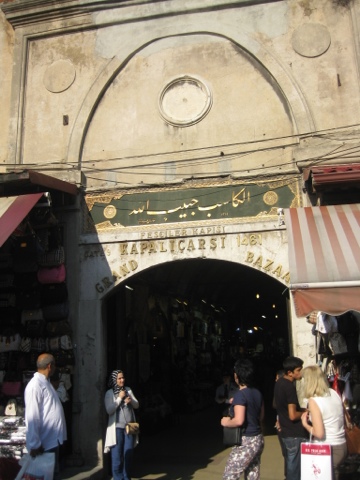 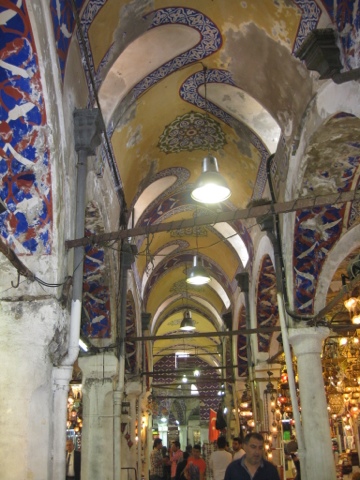