I admit it: I was a little lonely on my birthday today. Even though I am the luckiest person in the world to have this travel fellowship for my sabbatical, and I am so, so grateful, and feel so, so blessed–I still missed John and Henry today. Home with them is better than anywhere else in the world without them: that is true everyday, but especially on my birthday.

However, “chins up,” as my mother says, and onward and upward. I decided that to treat myself, I would go to one of my top sites in Kyoto that I have been dying to see: the Fushimi-Inari-Taisha, a vast Shinto shrine complex nestled into a mountain. This is the main Inari shrine in all of Japan, head of some 30,000 Inari shrines throughout the country. It took me about an hour to walk down there, but wow, it was totally worth it.

As I said a few days ago, Shinto is an indigenous Japanese folk religion, basically: very old, but still alive and well today. It continues to coexist peacefully with Buddhism, and many older Buddhist temples still have Shinto shrines dedicated to particular Shinto deities [kami]. Inari shrines in particular are the ones with the bright red [or orange] torii gates and the foxes: Inari is the Shinto god of fertility and fortune. The gates themselves serve to mark the boundary between the “ordinary” world and the sacred world of the primordial past. Nature itself–the stones, streams and trees–are part of that sacred world, which is why, although you can find Inari shrines tucked right off the street in the middle of the city [I saw one of those today, too], they are more commonly associated with mountains, green spaces, and rustic settings. The foxes themselves [called kitsune] are both guardians and messengers of the deity.

You can see from the pictures what an amazing experience it was. There are thousands of torii gates, stacked almost on top of each other in places, and as you climb to the top of the mountain, it feels like you are in a tunnel of orange. I climbed to the top [if there is a “top” to be found you know I will find it], and wandered around the grounds for about 90 minutes–but you could easily spend hours there. There are many, many different side pathways, and more small altars than I could count.

All of this got me thinking about the rather smug and dismissive attitude Christians [and Christianity in general] often have toward religious practices/beliefs that venerate gods who dwell in trees and rivers, and use animals as their messengers. We call it “paganism” or “witchcraft”–and either dismiss it as ignorant and childish, or repudiate it as demonic. Either way, we tend to see ourselves as better than all this, with much more advanced, sophisticated concepts of a God who is far too vast and powerful to run around in the forests.

All of this philosophical, intellectual superiority has come at a high price, I think–and I begin to regret it. It has both contributed to and been influenced by the sharp line of demarkation we have firmly established between God and ourselves–and even more, between God and creation. God is infinite, we are finite; God is immutable and formless, we are locked into specific bodies and places; God is “out there,” and we are “down here.” The earth isn’t God’s home, so clearly it can’t be ours, either: we are just travelers, wayfayers here, waiting to go “home” so we can be with God. To all that, I say, yuck! If this isn’t our home, whose home is it? And if God isn’t here, what does it mean, really, to say God is anywhere? God may as well be nowhere, if God only exists in some abstract, theoretical, conceptual idea of “heaven.” It’s a nice idea, but it doesn’t really mean anything, except insofar as it serves as a foil for “earth”–and that’s exactly the problem. How can we help but disparage the earth if it is everything heaven is not? How can we help but long to flee it if God isn’t here? This is a gross misconception Christianity has been perpetuating for a long, long time, and it needs to stop–not only because it is so destructive to us and to creation, but because it is simply wrong. God IS here, the earth IS our home, and the earth is bursting with the glory of heaven right now–even in the midst of its ugliness and its brokenness.

As I was wandering through those torii gates–permeable as they are, open on all sides–listening to the flow of the water, the call of the birds, the wind moving through the trees, with the ever-present foxes behind and before me at every step, I thought, “Wow–this is really what God is like, right?” Whispering to us at every moment of our lives in the sounds of the world around us, seeing us and being seen in and through the particular creatures of God’s creation, and accompanying us in the sun and in the shadows, with God’s arms stretching over and around us. We don’t have to believe that the earth IS God to worship a God who is present IN the earthly things around us–panentheism [God in the world] is not the same as pantheism [God is the world]; and the whole world changes when we eagerly seek God’s presence around every corner, and wait for God to speak to us through the birds, the deer, and yes, even the foxes. Why not? Let’s get God off the heavenly throne for a bit so she can throw off those heavy white robes and put on some huntress attire and go wandering in the woods for awhile. [And then let’s go look for her!]

If that idea makes you nervous, how about this: I would settle for a more robust interpretation of the incarnation, where God doesn’t just pop down into creation to wipe up humanity’s mess and then pop out again after a brief blink-and-you’ll-miss-it 33 years, but instead, where God enmeshed God’s very self in the DNA of the universe, such that we are irrevocably, eternally intertwined, never again to be separated. Jesus isn’t God’s quick fix-it operation, but instead the living, breathing proof of God’s passion and desire for creation, and God’s promise to be with creation always. Teasing THAT out a bit would help immensely here, too–and help us better understand the intimate connection between God’s creative activity and God’s saving activity at the same time.

Well, anyway–it was a great morning, to say the least. My only disappointment was I didn’t see any monkeys–see the picture below!

Then, this afternoon, I went to the Kyoto Handicraft Center, which, as the name suggests, is a great place for authentic Japanese souvenirs. I had also read that they have classes from time to time where you can try your hand at one of the traditional crafts, so today, I tried making a “kyo-ningyo” ball [that is the name of the particular style]. I could have tried to make a doll, too–it is the kyo-ningyo dolls that are famous–but I am about as craft-inept as anyone you are ever going to find. I have neither skill nor patience; when I was in Brownies, I sewed the pillow-cover I was making to my Brownie leader’s tablecloth, and it has only gone downhill from there. I knew a doll would be out of my reach, but I thought, surely I can make a ball! It didn’t turn out great, but it was really fun–even getting all my instruction from the teacher only in Japanese! You can see the results in the pictures below.

(Oh–and I saw two Western women who had paid to dress up like geishas and were getting their picture taken!) 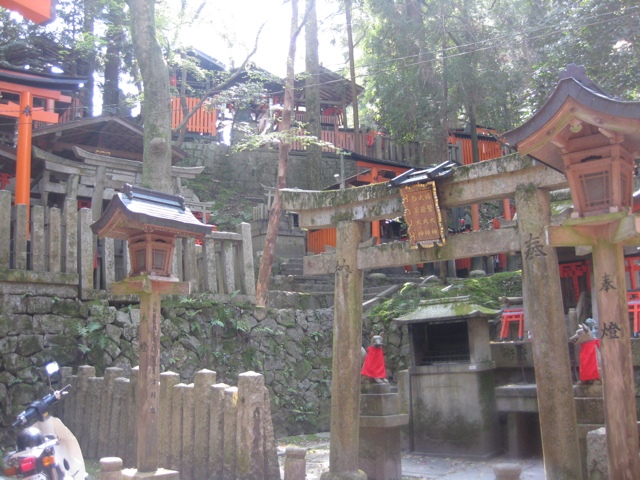 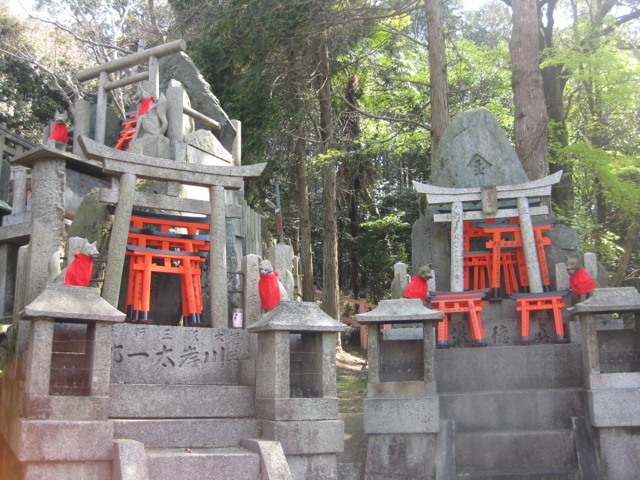 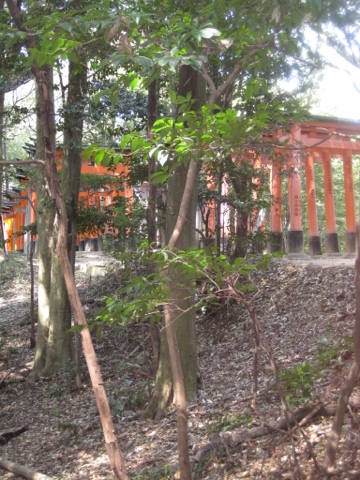 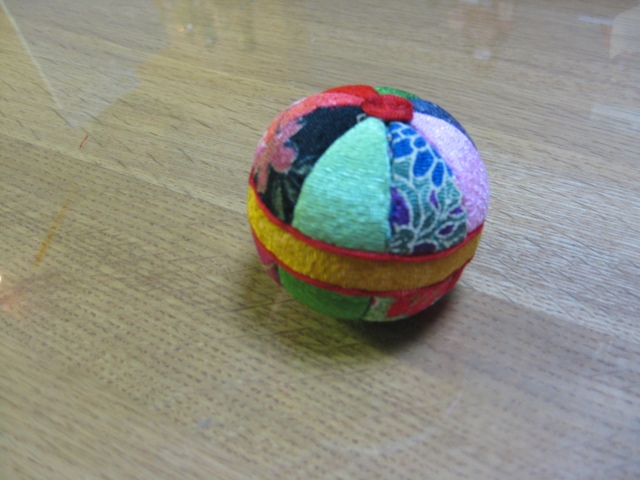 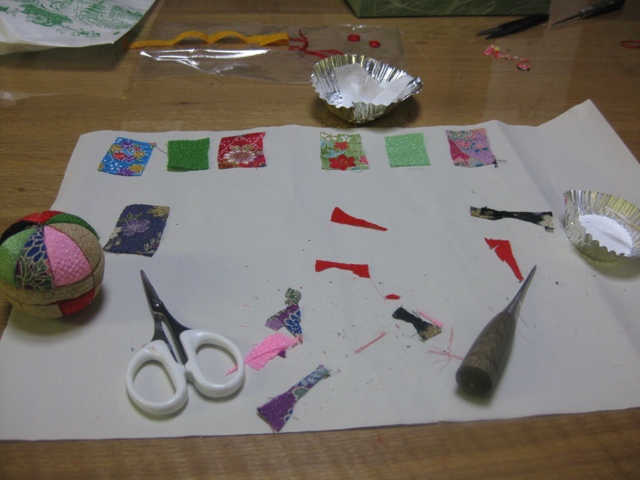 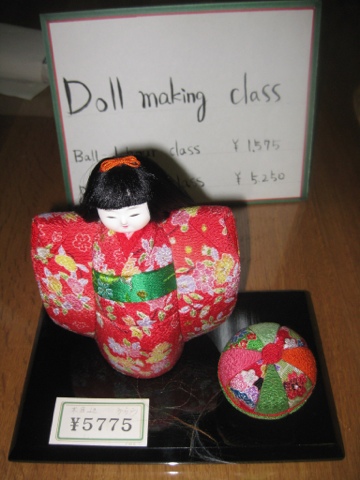 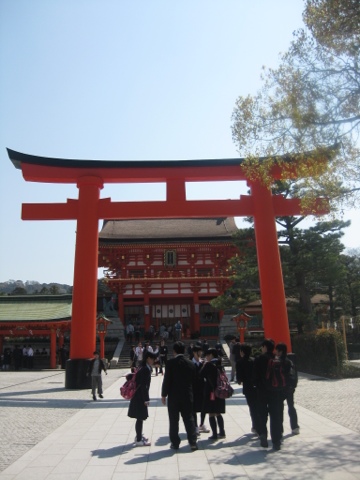 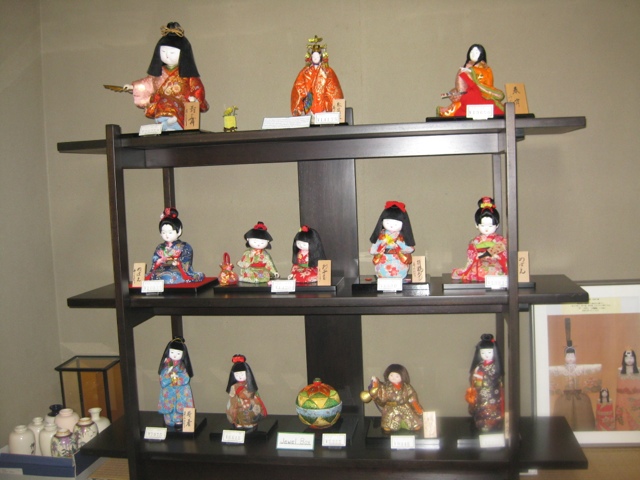 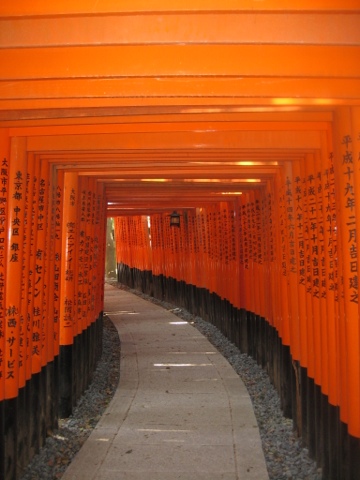 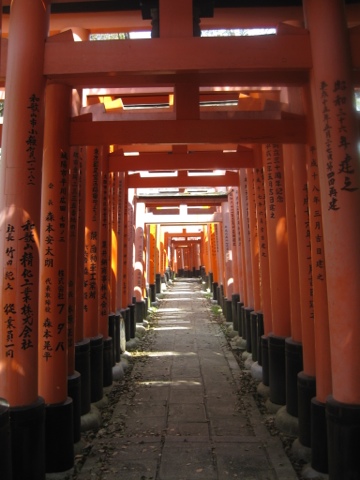 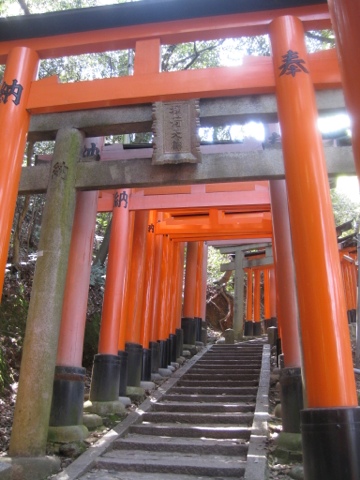 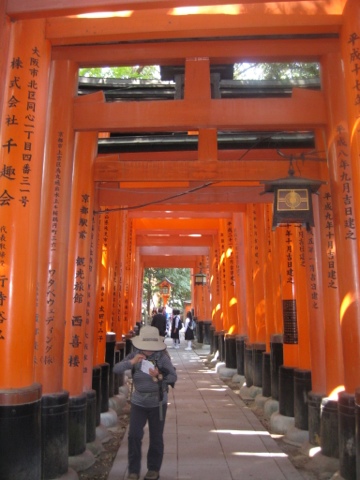 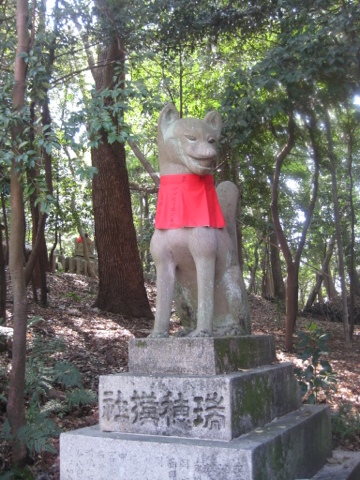 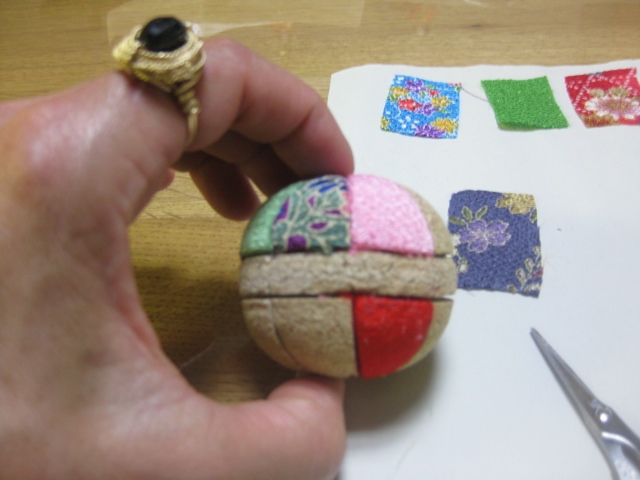 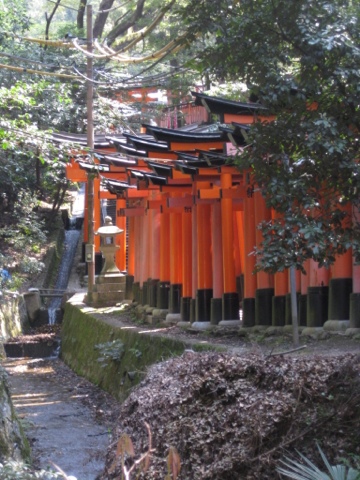 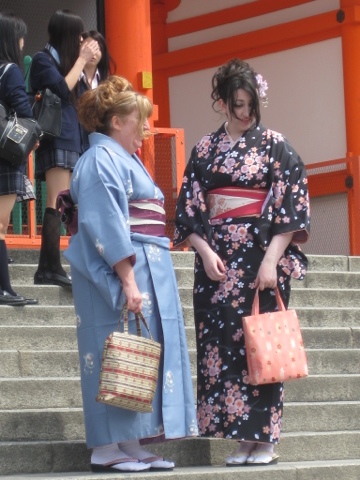