Well, after many hours of travel, I finally made it to Koyosan–and it was definitely worth the trip. I took the bullet train from Tokyo to Osaka, then a cab to a different subway station in Osaka, then another train to Gokurakubashi, then a cable car up the mountain to Koyosan. All in all, about six hours! But, given that we are about 3,000 feet up, and it is lush, quiet, and green here, it also was worth the wait.

I spent all afternoon with a professional guide, who showed me around some of the main sights; tomorrow I will be with her most of the day, too. So, I think I want to wait to talk about some of the specifics until tomorrow’s post, which, like this one and the day before it, I won’t be able to post until Monday night, once I get to Kyoto. Just for fun, I searched wireless networks with my iPad, and there aren’t ANY–not even any secured, private ones. I think I mentioned it somehow goes against the spirit of the place to have wi-fi in a temple–wouldn’t you agree? [Yet, I’m sure someone has noticed I checked anyway. Purely professional research, I say.]

So, you may be asking yourself–why Koyosan? How did I even find this place and why would I come here? Well, it is quite simple, actually. One of my dissertation advisors, who is also a very good friend, is a Shingon priest, and the temple where I am staying these next two nights is the temple where he studied and was ordained. Although his teacher is no longer living, his daughter is now running the temple, and Richard asked her if I could stay. [By the way, that is how it works in Japan–most temples are handed down through the family; and if there isn’t a son, one is usually adopted, and then typically married to the daughter, if there is one. However, this can cause problems, because that means the son will not carry on his birth family’s name, but his adopted family’s name. It’s complicated. In any rate, this is unusual, to have a daughter inherit.]

Koyosan itself is the center for Shingon Buddhism for the whole of Japan. It was founded by Kukai [Kobo Daishi] in the 9th century, when he returned from his study of esoteric Buddhism in China. There is a wonderful legend associated with the choosing of Koyosan. It is said that as he was searching for a place away from the distractions of the world, where Buddhist monks could practice and pray, he came across a hunter with two dogs [akin to Akitas], one white and one black. The dogs knew what he was looking for and they led him to Koyosan–also called Mount Koya. Kukai then realized that one of the kami who lived here [“kami” are the gods of Shinto, closely associated with the natural world] was behind it all–the huntsman was her son. So, the first thing I saw when we started walking around was the Shinto Shrine that was built to honor the two deities who are said to watch over Koyasan–you can tell a Shinto shrine from a mile away by the red torii gate/gates. [All of the buildings here are made of wood, which means that almost all of them have been rebuilt several times–often they have caught fire from lightening strikes. There is only one original building still standing.] At that time, Buddhism and Shinto were closely linked, so this wasn’t unusual. In fact, until the Meiji period, which began in 1868, many Buddhist temples incorporated Shnto deities as protectors. I will say more about Shingon Buddhism specifically tomorrow–today I want to describe my lodging!

There are roughly 120 different temples in Koyosan, and a little less than half have visitor accommodations. Here is a bit of what it is like to stay in an active temple. When I arrived by taxi from the cable car station, I slid open the door [an opaque screen, actually–that is what all the doors are like here: they don’t have knobs and hinges, and they certainly don’t have locks], after taking off my shoes, of course, and I caught the eye of one of the monks who was busy vacuuming the tatumi mats in one of the main rooms. He came over right away, and with limited English was able to find someone to show me to my room. The rooms are very small, with no furniture, save a shin-high table, which you can kneel in front of and practice copying a sutra, for example [I’m not very good at that, I discovered–it is hard to make the Japanese characters properly, even when you are just tracing them.]. I was surprised to find a small TV, too, which must be a concession to tourists, but I won’t be turning it on–not even for the sake of research! And, that’s it–no chairs, no bed, no closet, no bathroom. Only a small little shin-high shelf, on which was propped a small (3×5) mirror and a little box of kleenex.

After getting back from sightseeing, I was told I should take my bath. This is part of the nightly ritual: you don’t take showers in the morning; instead, at night, you put on the robe provided, and go downstairs to the bath room [not the room with the toilets, that’s a different room]. Once you go in, there is a small outer room where you take off the robe, and then you go into a larger open room with six places for “showering”–I use the term loosely, because basically you just stand in in front of one the nozzles and use it to wash up, with the least amount of splashing and contortions you can manage. Then, once you are clean, you soak in the large common bath–basically a really, really hot hot tub–for as long as you can stand it. It was nice to warm up after this afternoon: spring comes roughly one month later up here the surrounding low country, which means it is still pretty cold–the cherry blossoms aren’t even out here yet!

Then, after the bath, one of the monks brought me my dinner–all vegetarian, of course: the technical term is called “shojin ryori,” and it is based on the concepts of 5 flavors–sweet, salty, sour, bitter, spicy; 5 colors–red, blue/black, white, yellow, and green; and 5 cooking methods. It typically includes tempura of some sort, a soup course, rice (obviously), a pickled dish, a tofu dish and a few others. Needless to say, it was beautifully presented, and I managed to eat almost all of it, although I must confess that I could not identify everything I was eating. However, knowing that all of it was vegetarian gave me confidence [much needed, as I was trying to get my chopsticks around a bright green, squishy cube of something, next to a bright red, similarly-sized squishy cube of something else…] Then, after dinner, the same monk took away the trays of food and brought in my bed–a futon, a down comforter, and a pillow. I think I will be glad for the space heater that was brought in earlier. I also will be going to bed early–not only am I still a little jet-lagged, but the morning service is at 6:30 am!

Being here has really reminded me of all the times John has told me about, staying at different monasteries on retreats over the years. There are lots of similarities between his experiences and this one, I think, which then reminded me of Thomas Merton. One of the aspects of Buddhism that interested him the most was its monasticism. He also saw lots of parallels between Catholic monks and Buddhist monks, and felt there were some good opportunities to grow and learn from each other. Even though I am glad I am not staying here for the whole 2 1/2 weeks, I’m really, really glad to be here for 2 1/2 days!

All the pictures are from the temple where I am staying–inside and out, including the altar in the space where we had morning services. 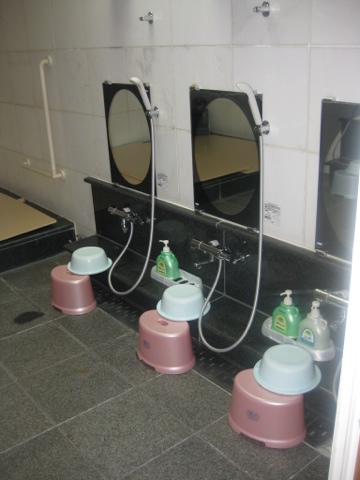 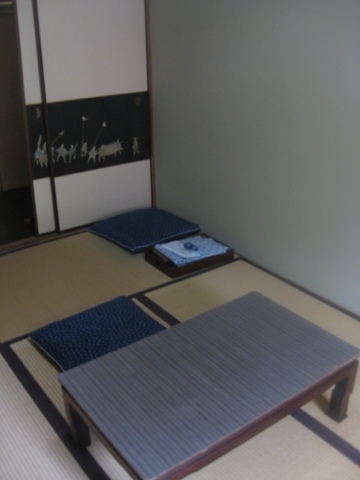 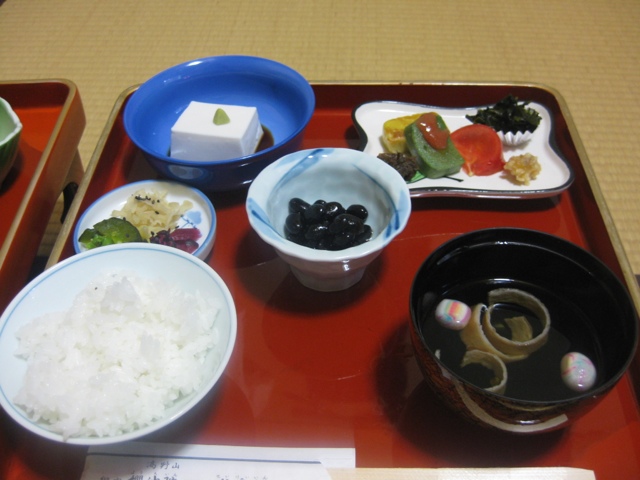 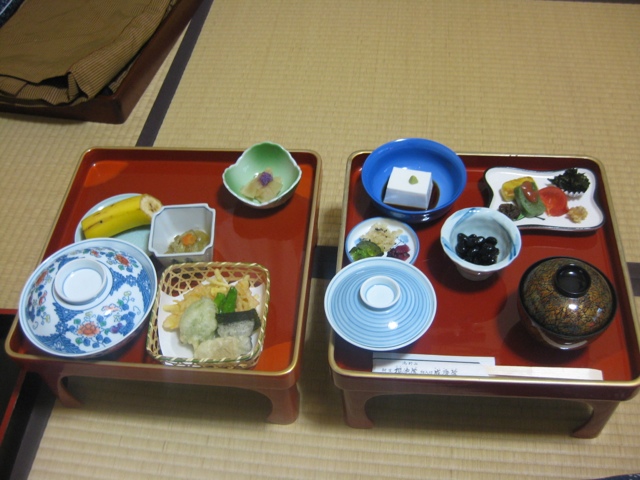 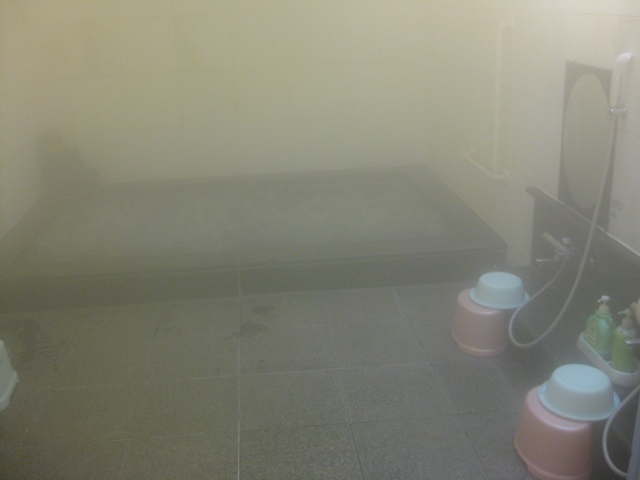 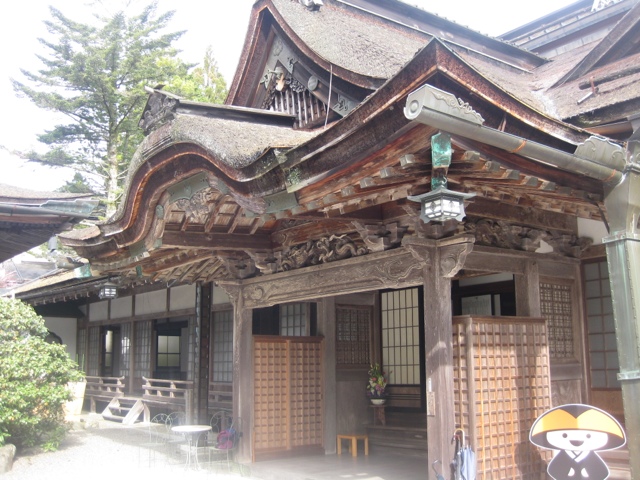 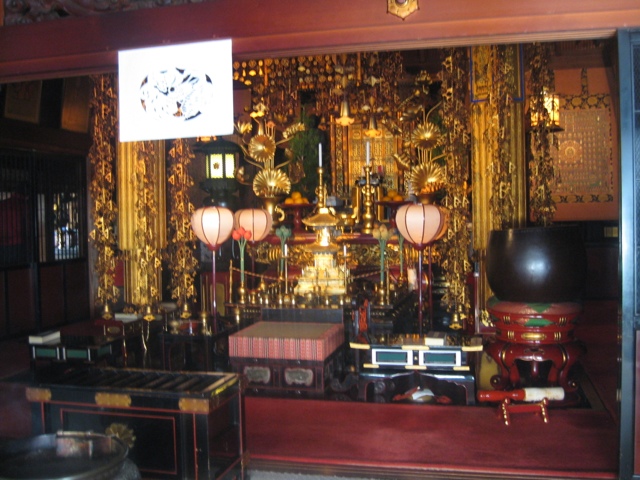 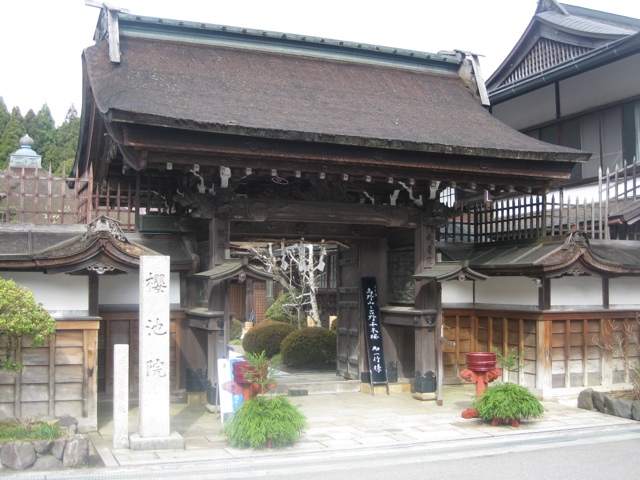 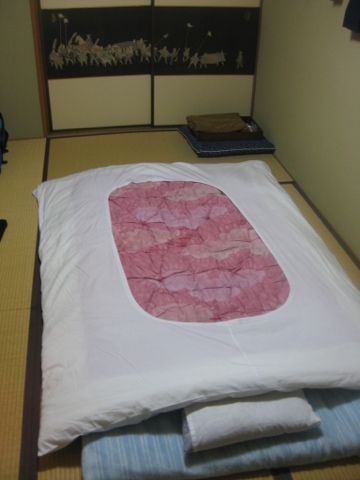 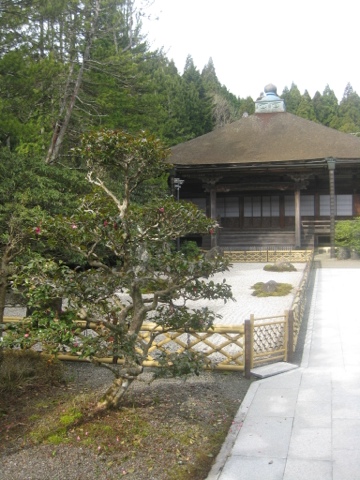