Today was a fabulous day, but the schedule was a killer. I left at 6:00 am with a really nice driver from the travel agency here at the hotel, drove through what continues to be shockingly unbelievable traffic for four hours [Today, camel carts–yes, camels pulling carts–and cows/buffalo wandering across the roads were added to the street traffic–along with motorcycles and small cars going the wrong way on the side of the road periodically. I didn’t see one accident though, which makes me think that there must be some unwritten yet understood rules that everyone follows, even though none of it makes any sense to me!], saw some great sites and some not so great things–more about that below–and then drove 4 hours back to the hotel, arriving here at 7:30 pm. Needless to say, I am sleepy!

So, there were two really great highlights today. First, we drove to Agra and saw the Taj Mahal–no wonder it is on so many bucket lists! “Amazing” doesn’t do it justice. The best part was, I had this great guide named Ajman who is just finishing his studies in Medieval Indian history. He was full of interesting information, friendly, and also a practicing Muslim, and it was fun to talk with him about religion, in addition to everything else. The Taj was built by Shah Jahan as a memorial to his second wife, Mumtaz Mahal, who died giving birth to their 14th child in 1631. [The other two wives are buried in other buildings on the compound, far away from the Taj itself, which is where the Shah and the beloved favored wife are buried together. Seriously, that “plural wives” thing seems to have some inherent flaws, I think!] The marble is spectacular, and the whole design is just amazing. The grounds are beautiful, too–we even saw a small owl, out in daylight, along with wild parakeets. It definitely was worth the trip. [Oh, I also wanted to note that, perhaps like you, I have read a variety of stories, including one in a recent “Smithsonian,” about the current state of decay of the Taj. My guide hotly disputed the claims of those engineers, emphasizing how well-cared for the building is!]

Then, on the way home, I asked the driver if we could swing by Mathura, which was on the way, and is the birthplace of Krishna! I mean, how could I resist?! So, a pandit met us at the Sri Krishna Janmbhoomi temple, and he showed me around–I couldn’t take any pictures [cameras were strictly forbidden], but I was so wishing I could: it was amazing! Gorgeous colorful murals depicting scenes from Krishna’s life on the ceiling of one building; and this modern outdoor tableau, with figures of Krishna, cows, gopis, etc. in a lovely pastoral setting. There are several different temple buildings, but my favorite was the one with the flat slab of rock on which Krishna was born! You know he was born RIGHT THERE because there are two smears of orange in the rock–those are Krishna’s footprints! [And I was immediately transported back to Israel! :-)] It was really great to be there–one of the other pandits gave me a marigold garland that had been offered to Krishna, and so came to me as a blessing. I took it and said thank you.

OK, but there was a downside to today, also–and that was the wretched poverty I saw on both sides of the Delhi-Agra road, pretty much the entire way. One person I talked to today told me that around 40% of people in India live below the poverty line; and, from what I can see, the majority of them are so far below it, they can’t even see the poverty line from there. “Poverty” here has only the faintest echo of what we consider poverty to be in the States, and I am still trying to process it all. I mean, the long, long stretches of burnt-out cars, shacks made from tin or blankets, the garbage along the road, the smell of urine and trash–it looks positively post-apocalyptic in places. And don’t even get me started on the animals, especially the dogs. I should be grateful for the garbage, I guess, because I’m sure without it, they would all starve to death. I just don’t know what to do or think in the face of such poverty–painfully, but gratefully aware simultaneously of my own abundance. It is a clear reprimand to everyone who claims to love her neighbor, but it is also such a complex, enormous problem, it is hard to know what the right response is: I both feel terrible, and I want to turn away. Somehow neither one of those things strikes me as very constructive or Christ-like. India is beautiful, colorful, multi-faceted and dynamic; but this sad underbelly of India’s beauty can’t just be brushed over, either. But what, then?

So, like I said–I’m still processing! Oh, but on the upside, I did see my first monkeys today; and monkeys definitely count on the “plus” side for India: I watched these two juvenile monkeys play, jumping around back and forth from a tree to a building, for almost 20 minutes–they were so cute!

I leave for Varanasi tomorrow, and probably won’t be able to post daily–there is no wireless in my hotel there, so I’ll need to seek out an internet cafe or something. I am really looking forward to my first glimpse of the Ganges!

The pictures are the Taj, a typical view along the road, and cows wandering around! 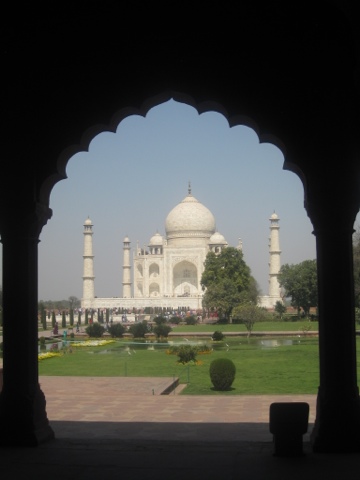 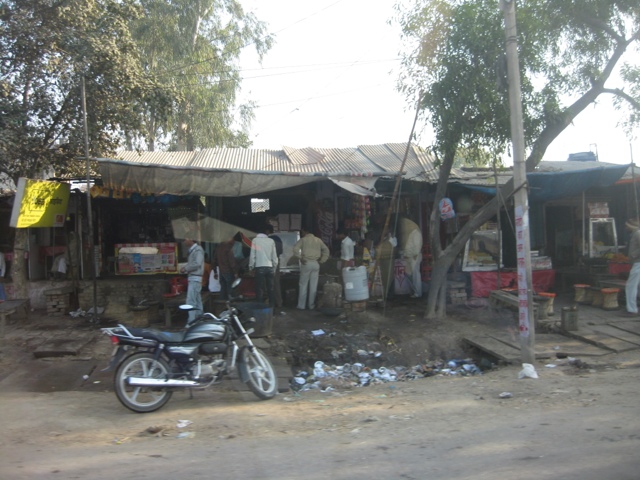 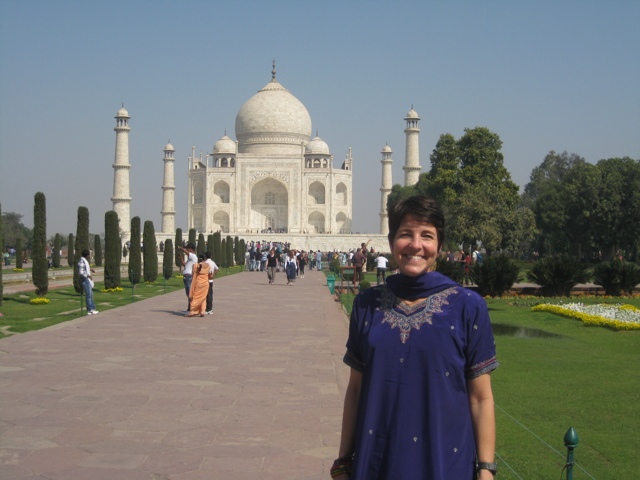