Yesterday, President Cooper-White and I took a group of students up to New York City to see “The Christa Project,” an exhibit that is currently at St. John of the Divine Cathedral.  It was an amazing trip, and I really loved the various pieces.  I want to share a few of those here, with a little commentary–if you have a chance, the exhibit is definitely worth it!
The image above is the image, a female incarnation of Christ crucified by the artist Edwina Sandys.  Christa was first exhibited at St. John in 1984, and it was very controversial, even though it was only exhibited an an art piece, not as a devotional image.  This time, however, it was hung over an altar.  In his comments on the piece, The Right Reverend Andrew ML Dietsche, Bishop of the Episcopal Diocese of New York, said the following:
“I pray that we may see in Christa that there is nothing of the lives and experience of women that is not known to God, and indeed is not woven all the way through our dear Jesus.  And it is especially my hope that women and girls who pray at the altars of this church and see before and above them the Suffering Servant in the body of a woman may remember that that great wound across the human family, that wound which is the suffering and abuse of women and girls, was also, with all of the violence and brokenness of humanity, lifted before God from the cross by the self-offering of Christ; lifted in and from Christ’s very person and being.” 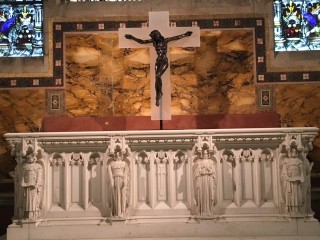 As you might imagine, then, a key focus of the exhibit as a whole was on bodies, and especially women’s bodies, gendered bodies, and economically marginalized bodies.  The pieces emphasized the ongoing need for justice and equality, and a recognition of our shared vulnerability and the need for solidarity and peace.

This piece is titled “September 11th:  A Memorial, 2012,” by Meredith Bergmann.  The exhibit notes say that this statue “–weaponized planes embedded in the hands of a goddess-like woman–is very clearly about disarming hostility.”  It seemed very appropriate for the times we are living in now.

This is an image of dancer and performance artist Eiko Otake, who put her body in the broken places in Fukushima, the site of a nuclear meltdown several years ago.  She is reflecting on the concept of “Dignity,” which she describes as “strong but precarious.”

This was one of my favorite pieces–you can’t tell from this still image, but the faces on either side of the triptych morphed into a new face every minute or so, as did the live image in the center, a person on a cross hanging over a city.  This piece is by Terry Flaxton, titled “The Intersection of Dreams,” and intends to lift up those who are usually overlooked or forgotten. 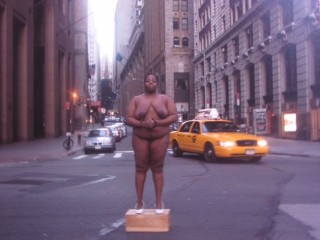 This is Nona Faustine, shown in a series of photographs titled “White Shoes.” In each image, she is standing at a location that played a key role in the slave trade in New York–this one is the site of an 18th century slave market.  A review of this series from The Guardian says this:  “She gives the violated nakedness of slavery the heroism of the nude”–that is, the classic nude of Greek and Roman sculpture.  I love that idea–a black woman seizing power through her deliberate and defiant nakedness. 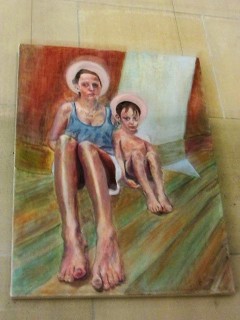 Last one:  this is by Heidi Loening, and shows Mary as a contemporary teenage mother, with her son Jesus.  Look at her feet.  They could also be refugees, right?
In the cathedral, these four questions begin the exhibit; I want to end with them here:
Iconography:  “Whose Bodies are Represented, and Why?”
Incarnation:  “How are Body and Spirit interconnected?”
Pilgrimage:  “Where can the Body take us?”
Celebration:  “How do Bodies Reflect our Histories?”
Right now, in 21st century America, these are absolutely critically questions we must be asking, as we live amidst bodies who are in danger–immigrant bodies, Muslim bodies, poor bodies and women’s bodies.  We must see them, and see them differently than they often are caricatured, if those bodies are to be protected, nurtured and allowed to flourish.