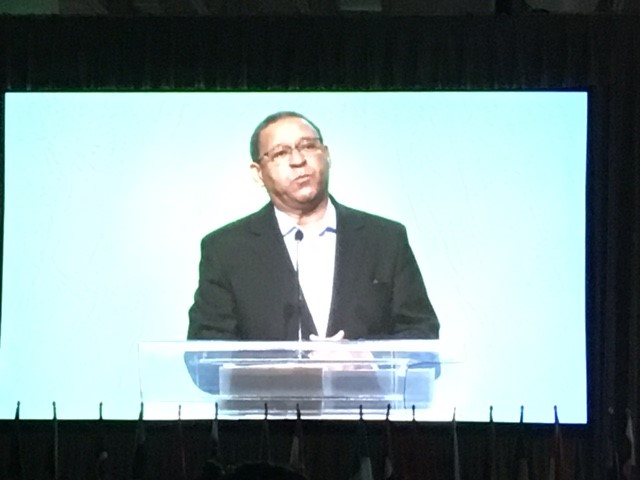 So, it’s actually day three today–my last day at the Parliament, so I’ll be reflecting on the whole Parliament either later today or tomorrow, but in this post, I wanted to share just a few things from last night’s plenary.
The first observation I want to make comes from the remarks of Islamic scholar Tariq Ramadan.  I have been familiar with his work for some time, particularly his work on Muslims in the West, so I was eager to hear what he had to say.  He was good, but here is the thing that I thought was most interesting.  First, you have to know that this crowd is extraordinarily liberal, and very, very emotive!!  [Personally, I think some of it has to do with people’s experience of emotion not being very welcome in many religious contexts, but that’s just a guess].  What this means is that the plenary audiences in particular, which are thousands of people, LOVE to applaud and cheer.  They respond to emotional appeals from the speakers, and indeed, really WANT to be engaged emotionally.  And, to be honest, it makes for some sound-bite-ish presentations, I think, that feel uncomfortably like political rallies to me….
In any case, Ramadan must have been feeling the same, because before he starting talking he demanded NO applause. [Someone actually applauded immediately after he said that, which was hilarious in its own right; Ramadan chastised him/her & reiterated his request.]  He said that he wanted us to think, not clap; and he said frankly that he worries about emotion–it fires us up today, and then it’s gone tomorrow.  It might feel good, but does it lead to lasting change?  I thought it was a very interesting comment to make–and quite contrary to most of the other presenters, who actually  seemed to be working hard to generate emotion & applause.  It has made me think more about the role of  “enthusiasm” in religion in general.
For me, however, the most powerful moment of the night came from Allan Boesak, pictured above.  He is a South African Dutch Reformed Church cleric and anti-apartheid activist.  He quoted loosely a passage from an Alan Paton novel, which I dug around and found.  Here is the  full citation:
In his novel, Ah, But Your Land is Beautiful, Alan Paton tells the story of Robert Mansfield, a white man in South Africa. Mansfield was the headmaster of a white school who took his athletic teams to play hockey against the black schools until the department of education told he could no longer do this.  He resigned in protest.
Shortly thereafter, Emmanuel Nene, a leader in the black community, comes to meet him and says: “I’ve come to see a man who resigns his job because he doesn’t wish to obey an order that will prevent children from playing with one another.”
“I resigned because I think it is time to go out and fight everything that separates people from one another. Do I look like a knight in shining armor?”
“Yes, you look like a knight in shining armor, but you are going to get wounded. Do you know that?”
“I expect that may happen.”
“Well, you expect correctly. People don’t like what you are doing, but I am thinking of joining with you in the battle.”
“You’re going to wear the shining armor, too.”
“Yes, and I’m going to get wounded, too. Not only by the government, but also by my own people as well.”
“Are you worried about the wounds?”
“I don’t worry about the wounds. When I get up there, which is my intention, the Holy One will say to me, ‘Where are your wounds?’ and if I say, ‘I haven’t any,’ he will say, ‘Was there nothing worth fighting for?’ I couldn’t answer that question.”
It’s the  last sentence that I found extremely powerful:  If, at the end, you don’t have any wounds, it signifies that there was nothing in the world you found worth fighting for:  wounds signify struggle, passion and commitment; in this case, a commitment to fighting  for peace, justice and love of neighbor.  It challenged me to think about what I find worth fighting for, and what wounds I am willing to suffer.

Finally, this is a picture of Jane Goodall–she was really who I came to see last night, and she  did not disappoint!  She is 81 and still travels 300 days a year–can you imagine?!  She emphasized our continuity with the rest of the animal kingdom:  there is a difference of degree, not kind, she said–and I couldn’t agree more.  What an amazing difference she has made in the world, in terms of our understanding of animals, the world, and ourselves.  She opened by saying her name [“I am Jane”] in the language of chimpanzees:  everyone kind of laughed [because it was vaguely Tarzan-like], but I don’t think most people realized that she was serious [at least, I think she was].  She has spent so much time with chimpanzees, she developed her own identification of herself that they would understand.  I mean, it’s the closest I’ve ever heard of a human being literally speaking the language of another animal.  She’s incredible.