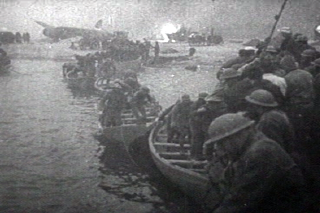 I’ve started listening to “The Writer’s Almanac” podcast first thing every morning [find it here:  The Writer’s Almanac]–I love hearing about events from this day in history, and also getting a poem every day.  I highly recommend it!

Anyway, today Garrison Keillor talked about the anniversary of two different battles: Dunkirk and Midway.  Here’s a brief recap of each:

Dunkirk was actually a pretty big debacle for the British–but what could have been a real disaster turned into a morale-boosting marketing opportunity.  So, it’s a WWII battle that took place in Dunkirk, France, in 1940.  The British [and French] got trapped at Dunkirk, which is on the French coast, sort of across the channel from Dover, by the advancing German army.  In hindsight, it’s clear had the Germans continued their advance, they could have wiped out the whole army–and basically won the war–but for some reason, Hitler called a halt to the advance.  This gave the British time to evacuate their soldiers, and they did it by calling for help from every possible boat in the area–including private fishing boats.  The evacuation was a success [they even went back and rescued almost half the French soldiers, too], but they had to leave tons and tons of equipment–that was the big loss.  Today is the anniversary of the last day of the evacuation.

The interesting part of the story for me is how Churchill chose to spin it.  By all accounts it was a defeat, but he chose to celebrate it as a victory of spirit, welcoming the soldiers back as heroes.  Thus, according to Wikipedia, “The term ‘Dunkirk Spirit’ still refers to a popular belief in the solidarity of the British people in times of adversity.” [Incidentally, this is just another reason for me to love Churchill–I’m a big fan].

Then, turning to Midway, this was one of the important battles in the Pacific theater–a big victory for the US over Japan.  This battle took place June 3-6, 1942, and it dealt a decisive blow to the Japanese navy.  The Japanese were hoping to take over Midway Island, which was an important American outpost, but a squadron of American bombers found the fleet while they were refueling.  The thing is, the American planes found the fleet by chance, because they had wandered off course.

So, listening to both these stories this morning, I was reminded of how things DON’T always happen for a reason, and how, when unplanned, unexpected, and even unwanted things happen, all you can do is choose how to respond.  Churchill took what could/should have been a marketing nightmare and turned it into a rallying cry.  The United States took an opportunity that fell into their laps and ran with it.  [And, by contrast, the German army didn’t–for whatever reason….]

I’m a planner, and I like control, so it’s hard for me when things happen that I didn’t plan for, and I’m not necessarily prepared for:  it can be paralyzing for me, because I don’t always think quickly on the fly.  But, in recent years, I’ve been trying to open myself up more [in Christian terms, this is called being more responsive to the work of the Holy Spirit, and it’s one of the hardest things ever!!], and be more flexible and more innovative as I think about life in general, and the flow of things:  seeing opportunities, rather than obstacles; and being my own best PR-person.  Life is not just what “happens,” after all–it’s what you make of it, too. Sometimes the best things start from mistakes or miscalculations–or, at the very least, sometimes a creative response can salvage something from what otherwise would only be carnage.