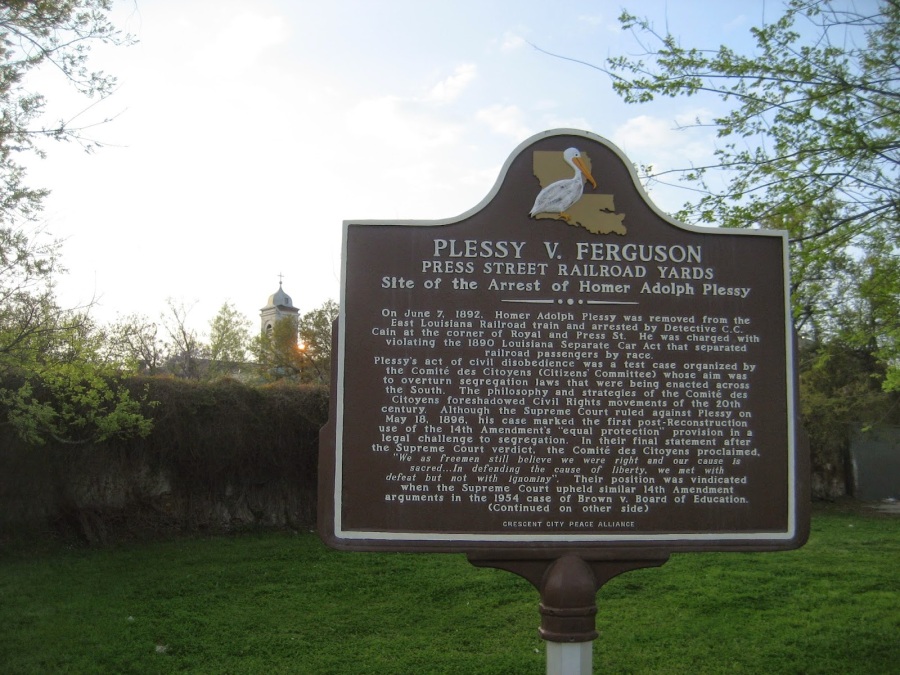 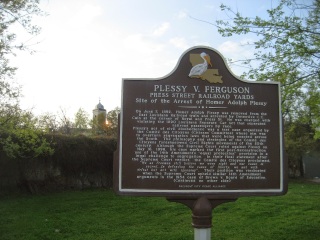 If you’re like me, you know that Plessy vs. Ferguson is code for “separate but equal”–or, as it turned out, “separate but totally NOT equal”–but you don’t remember much more than that.  To be honest, I’m sure I learned about it at some point, but until last week, I didn’t remember who Plessy was–or Ferguson, for that matter; or anything about the details of the case.   To my rescue came one of my favorite podcasts, “Stuff You Missed in History Class”–here’s their website:  Missed in History.  It’s a seriously great podcast:  the hosts are engaging, the topics are always interesting, and most episodes are around 30 minutes–a typical noontime walk with little Henry!

Anyway, they had a podcast on P v F last week, and it was really good.  Here are the bare facts.  The background, of course, is the Civil War, and Reconstruction.  Three amendments were added to the Constitution during this time:  the 13th [prohibiting slavery], the 14th [granting citizenship to slaves], and the 15th [the right of citizens to vote–African Americans, but still not women, but that’s another blog post….].  As might well be imagined, the Southern States resented these amendments, and went about trying to subvert them, especially as black officials were being elected in the South.  So, they starting passing laws meant to restrict African Americans’ right to vote, by demanding a literacy test, or property ownership, or the payment of a poll tax.

This contributed to the passing of what were known as “Jim Crow Laws,” that enforced segregation in a wide variety of public venues.  [The name was taken from a song-and-dance caricature of blacks performed by a white actor in blackface, called “Jump Jim Crow.”]  These laws were enforced not only by legal means, but also by violent white separatists; and the killing of blacks became both commonplace and un-punishable.  One of these laws was the “Separate Car Act,” passed in Louisiana in 1890, which required separate railway cars for blacks and whites.  This was the law in question in Plessy vs. Ferguson.

A group of affluent black citizens and their supporters, who lived in New Orleans, decided to mount a challenge to this law, and they put together a plan of action.  They formed a committee, got a lawyer, and found the perfect person to break the law.  Homer Plessy was law-abiding citizen, a thirty-year old shoemaker, and a man of mixed race.  This meant he had light enough skin that he could board the car without drawing immediate attention.  He got on the car, and then was asked to leave once his race was revealed.  He refused, and was arrested and jailed.  The trial began in Orleans Parish, and Judge John Ferguson ruled in favor of the prosecution.  From this point on, the case began winding its way up to the Supreme Court, where it finally landed four years later, in 1896.

You know the outcome:  separate but equal was upheld by a vote of 7-1 [one justice excused himself from participating because his daughter had just died].  But it’s that one dissenting voice I want to lift up here.  That opinion was written by Justice John Marshall Harlan, and he used powerful, prescient language that still resonates today.  He wrote:

“The destinies of the two races in this country are indissolubly linked together and the interests of both require that the common government of all shall not permit the seeds of race hate to be planted under this sanction of law.  What can more certainly arouse race hate, what more certainly create and perpetuate a feeling of distrust between these races than state enactments that, in fact, proceed on the grounds that coloured citizens are so far inferior and degraded that they cannot be allowed to sit in public coaches occupied by white citizens.  That, as all will admit, is the real meaning of such legislation as was enacted in Louisiana.”

I guess what really struck me was that first sentence.  The recognition, even more than 100 years ago, that all our lives are all bound up together in this country continues to be relevant & meaningful; and you can add to that whatever discriminated population you choose [in light of the recent fights over immigration, I’m thinking about Latino/as, too].  This is why our government needs to be an agent of inclusion and protection, helping us be the people we want to be, and keeping sin from holding sway over us, like it so often does when we are left to our own devices.  Luther’s understanding of sin as the self incurvatus in se is quite relevant when it comes to politics, I think, as we all want legislation that is the best for us, regardless of what it means for us all.  It’s not enough to look out for our own best interests; we need to be deeply invested in what is best for everyone; what is just for everyone.

In his recent article in “Smithsonian” magazine, Cornel West talks about Malcolm X, and concludes by saying “It is a beautiful thing to be on fire for justice.”  May we all exhibit such beauty.