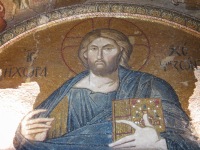 So, all my students know that the topic of salvation is my very favorite theological locus–I find it infinitely fascinating, rich and rewarding, and continue to think it is really the heart of any proclamation of the gospel, and stands at the core of what Christianity is all about.  And, of course, this topic also is really important to me because of the work I do with other religious traditions.  The Christian tradition has a long, sordid history of trumpeting extra ecclesia [or extra Christum] nulla salus–outside the church [or Christ], no salvation–and this belief has justified abominable treatment of indigenous peoples around the world, to say nothing of Jews and Muslims.  Suffice it to say that, as far as interreligious dialogue is concerned, the doctrine of salvation historically has been a divisive point of contention, rather than a celebratory point of convergence.

In the late 20th and early 21st centuries, however [beginning most dramatically with Vatican II, but certainly even before], there has been lots of interesting, constructive work done in this area:  that is, thinking about the doctrine of salvation specifically with other religious believers in mind–not people who have no faith, but people who are satisfied and thriving in a religious tradition other than Christianity.  [In this context, I can’t help but mention one of my very favorite texts in this regard, Hans Urs von Balthasar’s Dare We Hope that All Men (read:  people) Be Saved?]  In the class I am teaching this fall, which is basically an interreligious examination of salvation, we are reading a really great book by Gerald O’Collins, SJ, titled Jesus Our Redeemer:  A Christian Approach to Salvation.  The chapter that we will be discussing on Wednesday looks specifically at “The Salvation of Non-Christians.”

It’s a great chapter, and I want to share one part of it in particular.  He talks extensively about the New Testament witness to Jesus, and at one point, he emphasizes that the clear belief in Scripture is that outside Christ there is no salvation; however, at the same time, he says that the NT also is clear that “there is no outside Christ.  We are all part of his saving story.”  Notice how that changes things.  O’Collins goes on to list five key “considerations” that underscore and emphasize this logic:

2.  Jesus’ proclamation of the coming kingdom of God:  “There was a universal dimension to this preaching…The first Christians knew how his resurrection from the dead authenticated his claims, and, in particular, the claim to being in person the agent of the divine kingdom that is and will be all-inclusive, or–in other words–to being the agent of universal salvation.”

3.  The solidarity of Jesus with all human beings in the incarnation:  “He entered history and became, in a sense, every man and every woman.”

4.  Christ as the agent of creation:  Scripture confesses Christ as “the universal and exclusive agent of creation.  This belief underpins a conclusion about Christ’s universal role for salvation.  Wherever the created world and its inner and outer history mediate God’s grace, those who receive this saving grace are in fact receiving it through Christ.”

5.  Christ as divine Word:  “As divine, Christ is universally present, actively influencing the mediation of redemption to all.  Those who accept his divinity have no choice but to acknowledge also his universal role for salvation.”


Now, to those who know, these clearly are “inclusivist” arguments–arguments that everyone will be saved, but that Christ is the agent of salvation for all, including those who do not know him or believe in him.  Obviously, this is a satisfying argument to many Christians:  I get that.  However, it has its own problems, too, not least the fact that it drags everyone kicking and screaming into the kingdom whether they want to be there or not, completely relativizing and dismissing all other religious practices/beliefs in the process.  So, I’m not fully endorsing it.

However, what I like about O’Collins reasoning here is that it provides a way for Christians to think openly and more creatively about the relationship between Jesus Christ and other religious traditions, and offers a way out of the dead-end that says only Christians are redeemed and loved, and everyone else is out.  No one knows for sure how it’s all going to turn out for us–except I feel sure that some surprises await–but in the meantime, I’m all for fresh eyes and fresh thoughts about this issue. I think the more we learn about God’s saving work in the world, the more amazing and wonderful it all is.