Cats.
Cats abound in Istanbul, while there are very few dogs. Part of the reason for this, I am sure, is the fact that the Prophet Muhammad had a few things to say about both: cats, he felt, were proper companions for a household; dogs, he felt, were not. [Don’t ask me the exact citation for this–somewhere in one of the Hadith collections!]. So, typically, Muslim families don’t have dogs, but they may well have cats. That means that you see cats everywhere–including kittens–and actually, they don’t seem to be in too bad of shape. The ones I see crawling around on the rocks on the shore hang out with the fishermen, who seem to feed them pretty regularly. I also saw two different cats today who had caught their own meals–one had a mouse, the other had a bird. A friend also told me that she knows two people who live on her street who have made it their mission to feed the neighborhood cats every day; and she said many, many people in Istanbul are like that, making sure the cats have food and water. I suppose if you aren’t going to spay and neuter, food and water is the next best thing!

I do enjoying watching them, especially on my morning run: cats are so interesting when they interact–so many of them seem to just barely tolerate the company of other cats. I personally love the “kitty stand-offs” that result when someone has clearly overstepped her bounds: each cat crouched, tail barely twitching, making some unearthly low growling sound, waiting for the other guy to blink. I’m a dog person for sure, but there is no doubt that cats are very entertaining.

Smoking.
The “smoking kills” message has not made it to Istanbul–people smoke like chimneys here, although there is a ban in many restaurants. This translates into lots of people smoking on the streets, which means that while I am wandering around, I am smoking, too–I can’t tell you how often I have sucked in a mouthful of the guy’s exhale in front of me. This also translates into lots of butts on the ground: why is it that smokers don’t think that a cigarette butt counts as garbage? OK–off my soapbox.

Exercise.
Regularly every morning I see a few people running, and a few more people walking–but, given the size of Istanbul, I would expect to see more, especially on the nice seaside path that parallels the Kennedy Caddesi. However, people do seem to like the exercise equipment that you find in every park in Istanbul: almost every one of these little exercise areas I have passed, at various times in the day, has someone using the machines. They’re old school, for sure, but they don’t need much maintenance, which makes them very practical and weather-resistant. I think I mentioned already that I now have seen several very conservatively-dressed women using them, too: it makes for kind of a strange visual, but I’m always for exercise, in whatever form it takes.

Tourists.
One of the things that has been interesting about staying in the same hotel for so long is seeing people come and go. I was thinking about that this morning as another new family came up to the roof-top restaurant for breakfast and audibly gasped at the beautiful sight of the sun-drenched Blue Mosque staring at them across the restaurant balcony. It reminded me how easy it is to get complacent with things that we see every day. I mean, I haven’t gotten to the stage yet where I don’t consciously notice and reflect on the beauty of the Blue Mosque, but I certainly don’t stop and gape at it anymore: it’s just part of the scenery now. So, at least this morning, I was grateful for new tourists to remind me of the wonder of this setting, to not take it for granted. And, when I get back home, I want to remember not to take the wonder there for granted, either. I want to be like Orhan Pamuk, who, although he has lived in both Europe and the United States, finds his greatest inspiration in Istanbul, his hometown, in the very house where he was born and raised, and has now returned to live.

OK–now to today’s events. I met a young woman today who actually studied at Gettysburg College–a friend of a friend–and is preparing to head to the University of Iowa’s creative writing master’s program this fall. Her name is Nazli, and suffice it to say, she is very interesting and we had some great conversations. Particularly of interest for me, she is definitely a “secular” Turkish citizen, which makes her very different from the other Istanbulis [I’m guessing at the equivalent of “New Yorkers”] I have met here. She puts herself in the class that she said are called “White Turks,” wealthy families with ties to the Ottoman ruling class, who, as a whole, embraced the Western, secular reforms of Ataturk and wren’t practicing Muslims. So, I especially appreciated her views on the role of Islam in Turkey: in her experience, some of the religious practices, such as fasting during Ramadan, going to the mosque on Friday, and even women covering their heads are more cultural expressions than evidence of actual religious belief.

That, of course, raises the interesting question about who gets to say who “really” believes, and how [or whether or not] you can separate “culture” from “religion.” In my view [and my travels have confirmed this], these are deeply, deeply intertwined concepts and almost impossible to delineate entirely. As an example of that, she herself told me that when she first came to Gettysburg, she was really homesick for Turkey, and one of the ways she “insulated” herself–protecting her cultural identity–was to refuse to eat pork while she was a student there. Obviously, this is a Muslim practice; naturally then, because Turkey is an almost entirely Muslim country, you can’t find pork here–it just isn’t sold [there may be a few rare exceptions, but they are just that–rare]. So, for her, not eating pork wasn’t a religious practice, but a Turkish one. But, at the same time, someone viewing that action from the outside would, of course, assume that there was some religious motivation behind it–and I wonder, maybe on some unconscious level, there really was. Who knows?

Anyway, we had a wonderful day. We met at Kabatas, the last tram stop, and took a bus up to Emirgan, to the Sakip Sabanci Museum (housed in Sabanci’s former mansion) where we saw a wonderful exhibit on “Rembrandt and his Contemporaries,” as well as a permanent exhibit on Ottoman calligraphy. I’m including two pictures from the exhibit: one of the ugliest Jesuses I have ever seen, from Hendricks ter Brugghen’s “The Adoration of the Magi” (1619); and the other of a beautiful cup that was used in a popular drinking game–you blew on the windmill to start it turning, and then you had to drain the glass and set it upside down on the table before the windmill stopped turning. Somehow, that just struck me as funny.

Then, we walked all the way back down along the path that runs along the European side of the Bosphorus, passing on foot all the places I saw from the ferry yesterday. The walk took about 3 hours, but it was a glorious day, and I loved it. I got back to my hotel just in time to make my FaceTime date with John. 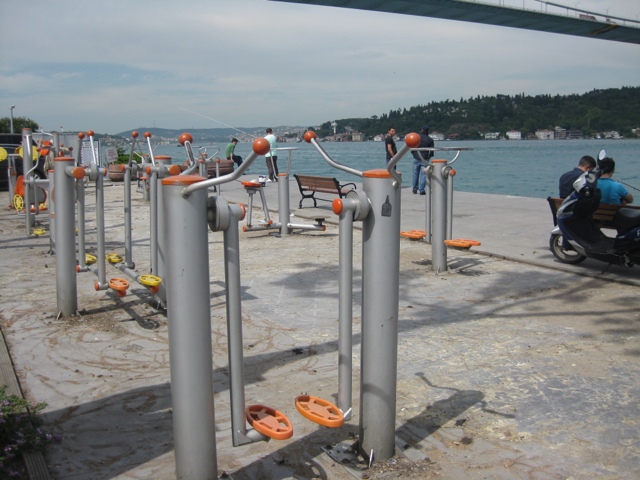 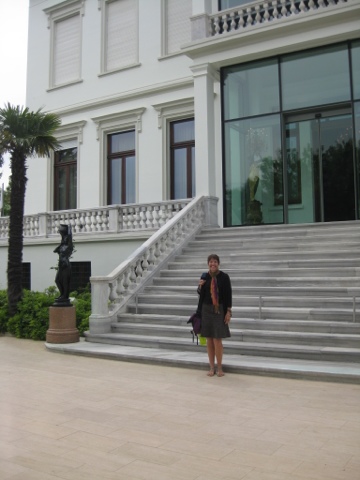 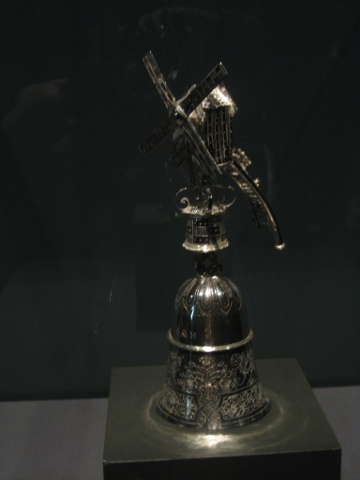 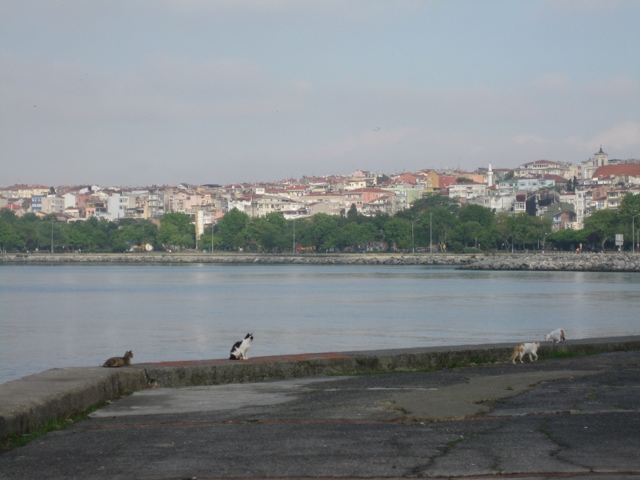 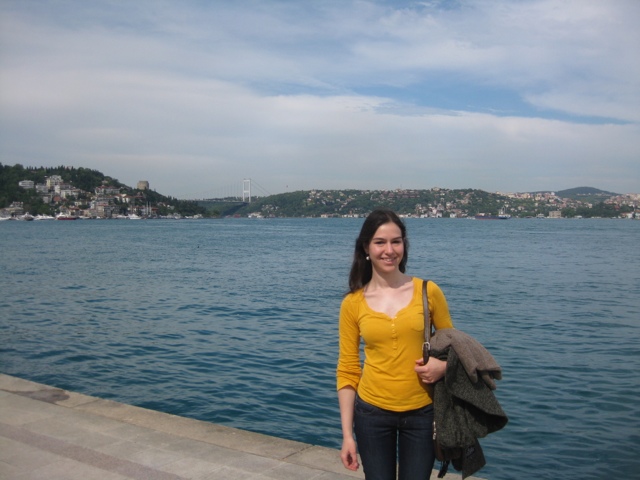 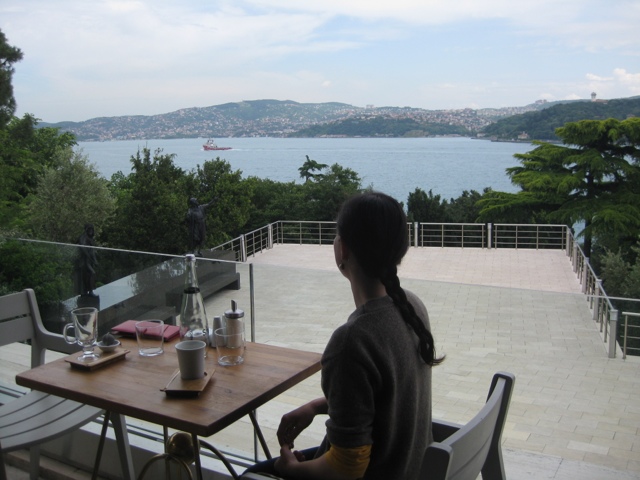 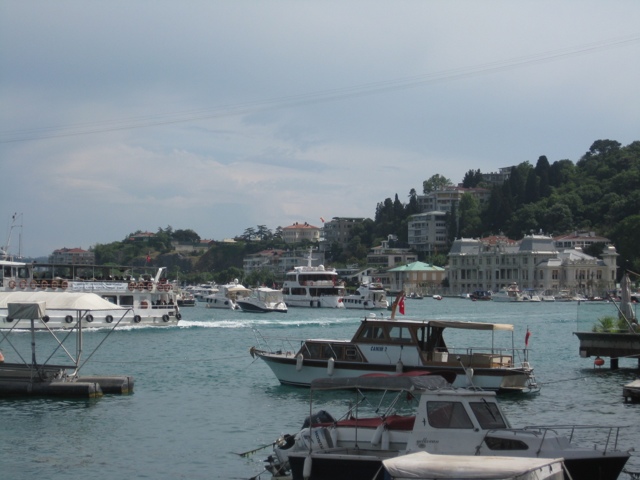 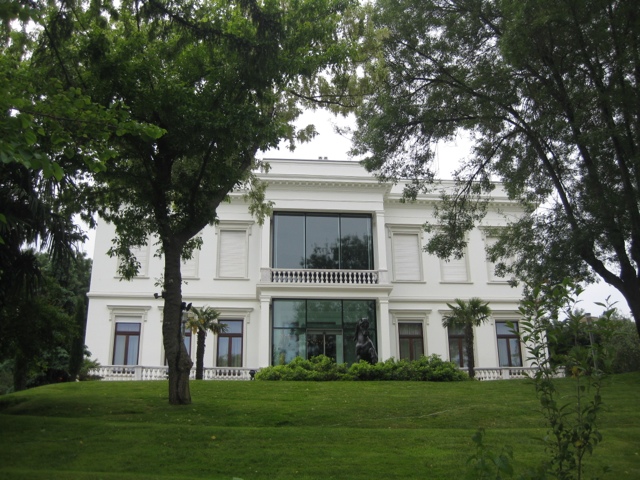 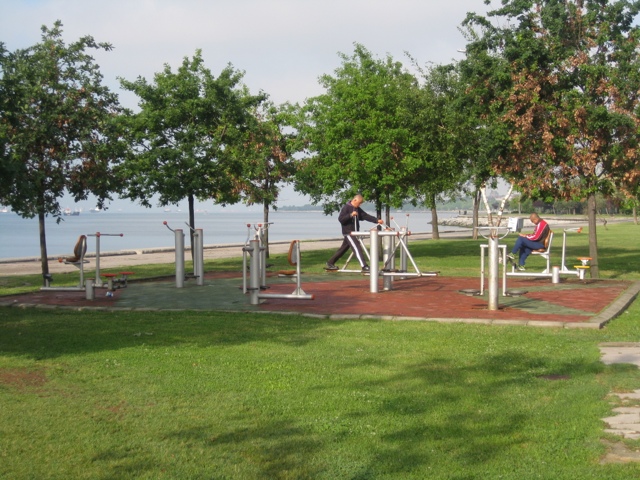 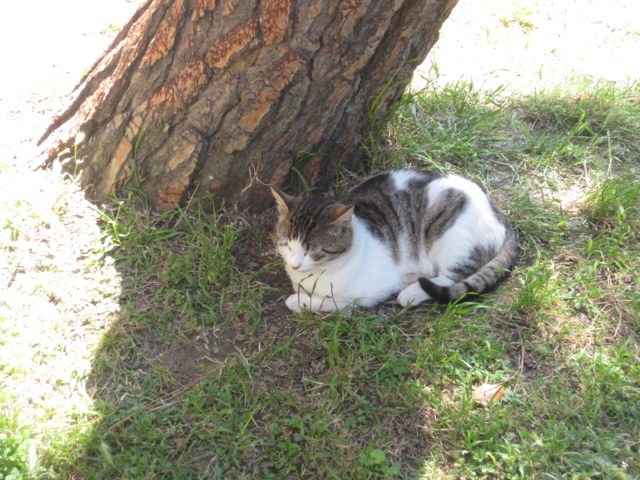 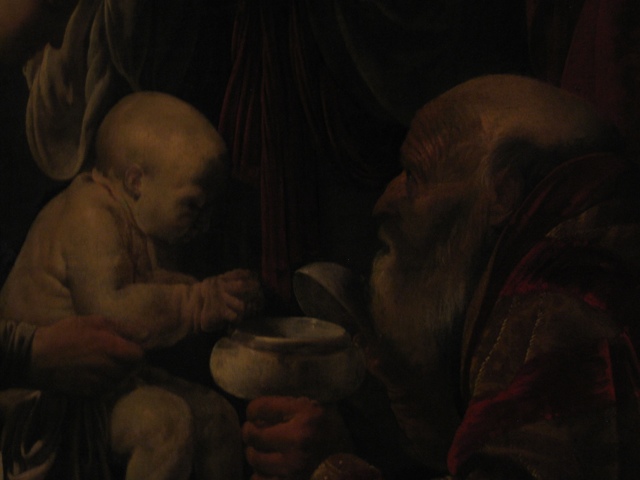 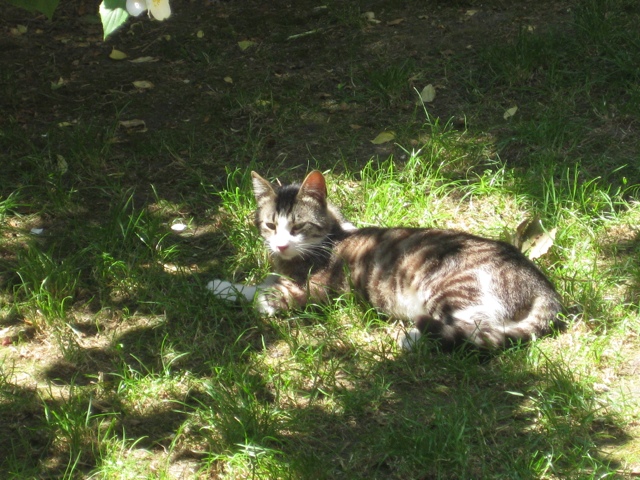