I spent much of today wandering around the Sri Meenakshi temple, which is, as my guidebook says, not so much a temple as a 6 hectare complex; and every inch is absolutely breathtaking. Even now, sitting at my iPad, I’m not even sure how to begin to describe it. It was packed with people, full of colorful designs, and small shires in all directions. It is a wonder.

Well, what I can say is who Meenakshi is: she is an incarnation of Parvati, consort to Shiva, and it is to her and Shiva [here named Sundareshvara, which means “beautiful lord”] that the temple is dedicated. This is the story: there once was a king of Madurai, Malayadwaja Pandya, who remained childless for a very long time. He performed sacrifice after sacrifice, seeking an heir, all to no avail. Finally, however, a three-year old girl came out of one of the yagnas [a sacred fire], and Malayadwaja decided to adopt her and raise her as the future ruler. Unfortunately, the girl had a flaw: she had three breasts, which worried the king. However, he was reassured by a divine voice: as soon as she met the man for whom she was destined, her third breast would disappear. The young girl grew into a beautiful, noble princess, skilled in all arts of battle, but no man could win her heart. Finally, however, she met Shiva on the battlefield one day; and the moment she saw him, her third breast disappeared, and she recognized Shiva as her divine partner–realizing her own true identity as the goddess Parvati at the same time. “Meenakshi” means “fish-eyed,” which is actually a great compliment to one’s beauty in Tamil poetry [but I wouldn’t try it at home].

The current temple itself was built in the 16th/17th centuries–even though it is mentioned in Tamil literature centuries and centuries earlier. The temple is the heart of the city, and the history of the city itself is intertwined with that of the temple. It has 12 gopurams, four of which are particularly large and stand at each of the four entrances to the temple. The two main shrines inside are open only to Hindus–those are the main images of Meenakshi and Sundareshvara–but there are hundreds of other smaller images that are also worshipped, including one very large idol of Ganesh [who is Shiva and Parvati’s son], and an orange image of Hanuman, the monkey god who helped Rama defeat Ravena in The Ramayana. However, most of the smaller images are of Shiva and/or Parvati, of course. There is also an enormous tank of water in the center of the complex–well, I should say, there is supposed to be: currently it is empty and under construction.

Within the temple complex there is a small museum, housed in what is called the hall of 1,000 pillars (there are actually only around 980, but who’s counting), with a variety of stone and brass images, including a large Nataraja [that is the image of the dancing Shiva–both creator and destroyer]. It was interesting–in a couple of the glass cases housing the statues, people had slipped prayers in, much like the Western Wall. One was even in German–and I wondered if s/he was a Hindu.

While I was walking around the museum, I came across a group of schoolgirls–they were in the 10th class, which here means they were around 15 years old. So, they were all checking me out and I was smiling at them, and finally they started to come up to me. This was how they did it: one of the girls would grab another girl’s hand and drag her by the arm up to me and say, “This is my friend.” And I would shake her hand–I think they wanted to make sure I wasn’t going to bite or anything–and say, “Hello!” This happened a few times, and then the floodgates opened! In the blink of an eye, I was surrounded by this mob of sweet young girls all of whom were saying “Hello” [which almost exhausted their English, I think–or maybe they were just very shy], and shaking my hand. Finally, their teacher came up and we talked for a bit while the girls were crushing in on all sides. It was hot anyway, and being in the middle of that pack, I thought I was going to pass out! So, I took a few pictures [see below], which they liked very much, and then, to a loud chorus of “Goodbye!” they went off. There were a few other Western tourists watching the whole thing–I think they couldn’t believe it! It was funny, but sweet, I thought. They weren’t from Madurai, so maybe where they live they don’t see many Westerners.

The other interesting encounter that I had happened when I was walking around some of the smaller shrines. I saw an Indian woman keep looking at me, like she wanted to say something; and then all of a sudden she was in front of me, telling me that she liked what I was wearing–basically thanking me for wearing appropriate dress [I was in a shalwar kameez]. She then told me I needed to tell the other Western tourists what they should be wearing–sleeveless tops and capris were NOT appreciated! It is always a challenge, I think, to get into the mindset of another culture–or even another context in our own country–and respect norms that are different from our own. Often we have a tendency to think [for example]: “I look modest enough, this should be fine. And if it isn’t, that is their problem.” I mean, maybe not as crude as that, but in the individualistic environment in which we live, we tend to want to please ourselves first and others second–sometimes that’s good and right, but not always. Not here, for example!

What else can I say? This temple, like the one in Chennai, is also closed from 12:30 to 4:00 pm, to give the gods a break, basically. One of the key elements of Hindu worship is called “darshan”–it means seeing and being seen, and it is considered particularly auspicious. So, there is always a steady stream of devotees coming for darshan; and after awhile, the gods need to rest. At a temple this size, there are dozens of priests who live here full-time to take care of the needs of the deities [waking them, bathing them, dressing them in the mornings, and doing the reverse in the evenings], and, of course, the needs of those who come to worship them. In some of the pictures, you will see people lighting small ghee lamps, and bringing flowers, coconuts, and bananas as offerings. They also will smear their faces with differently colored powders that were first smeared on/offered to the deity. The individual then receives the powder back as a blessing.

Finally, there was another tree in the courtyard FULL of small pieces of paper with written prayers, and also the small cradles. There was a statues of Ganesh here, too. He is the god who removes obstacles, so people often seek his blessing before beginning a new endeavor. I just kept walking around until I was too tired to walk anymore–and my feet were getting so hot: no shoes in the temple, of course. [Even in Christian churches here people don’t wear shoes.] It was definitely worth the trip! 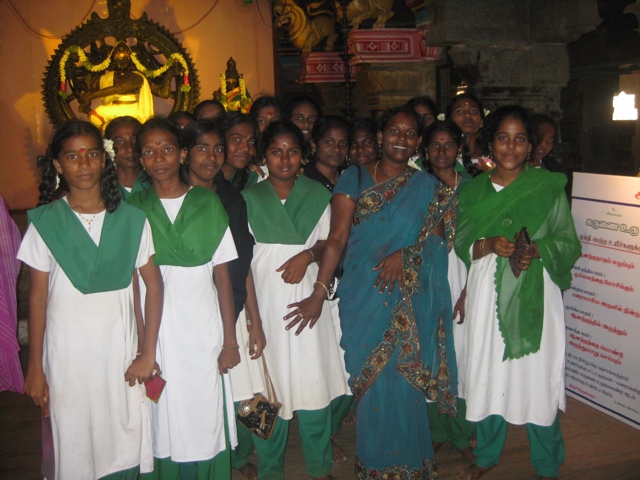 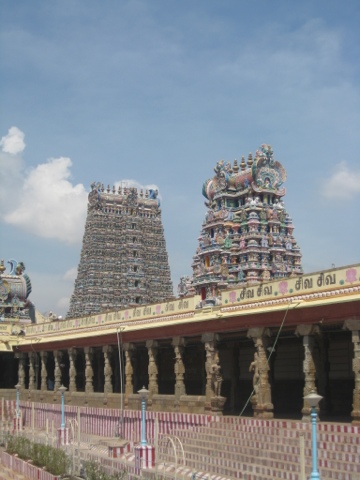 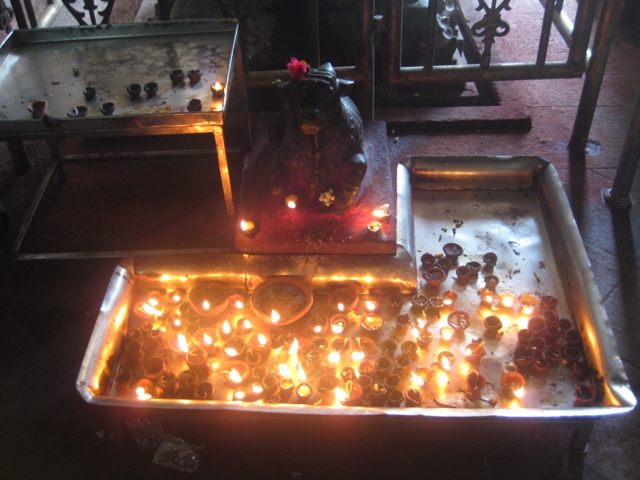 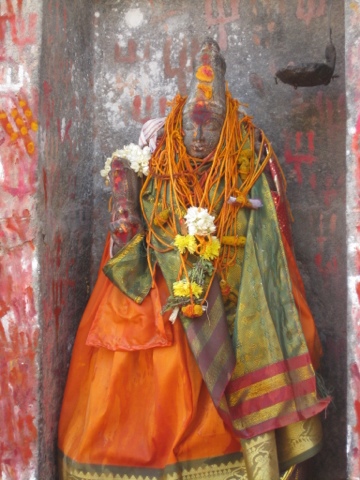 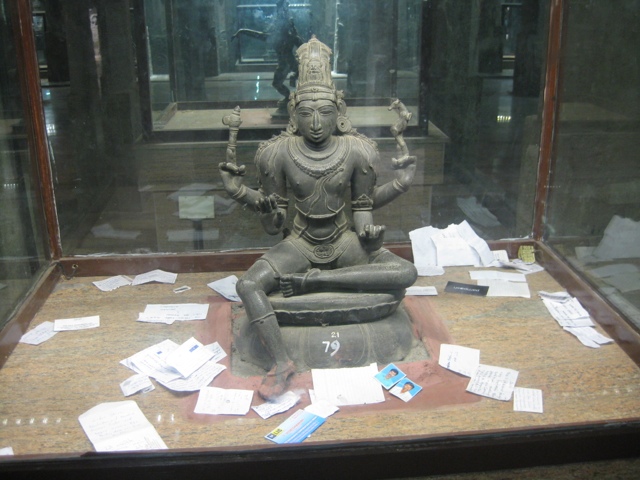 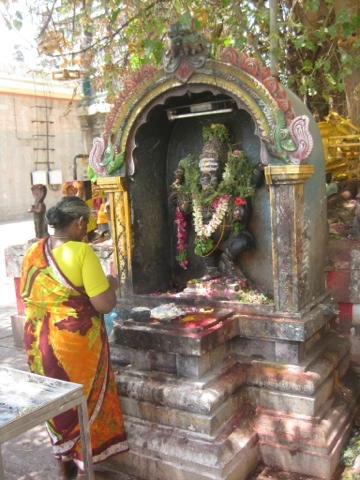 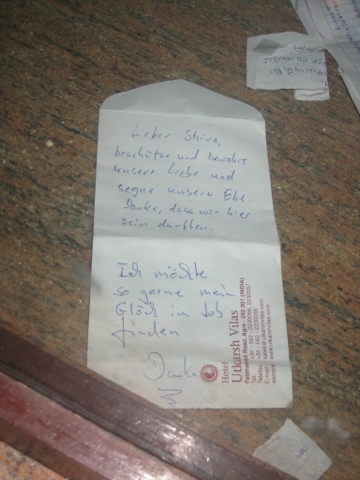 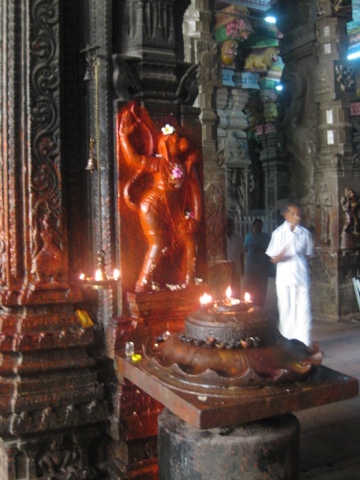 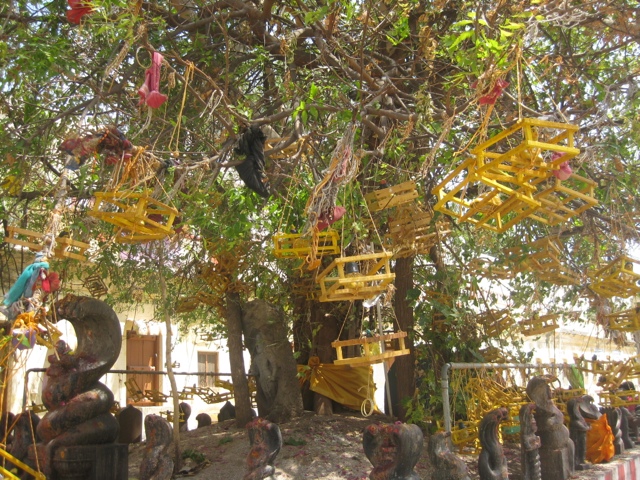 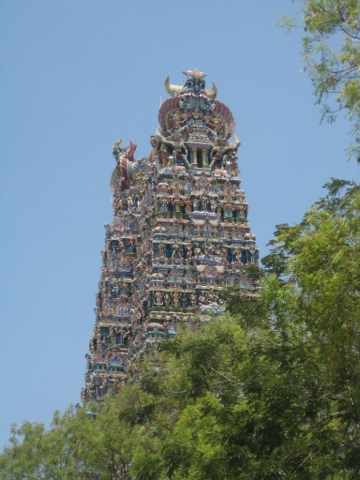 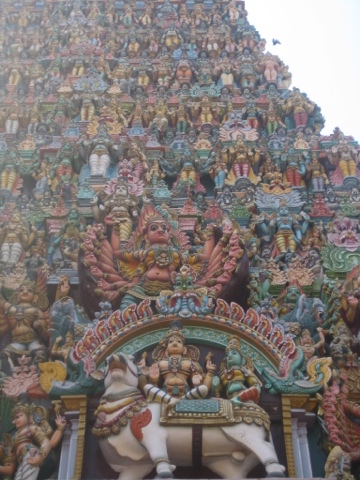