After a 12 hour travel day yesterday [a one hour drive to Varanasi airport + wait time in airport + 90 minutes flight to Delhi + wait time in airport + 2 1/2 hour flight to Chennai + 30 minute drive to hotel], I made it to my hotel in Chennai, and I must say, it is quite a step up from the Varanasi accommodations! First and foremost, because I am actually looking out a real window as I write this: my “window” in Varanasi consisted of a little square looking out onto a shaft within the hotel itself. By contrast, here I am in a corner room, with almost floor to ceilings windows on two sides. Second, there is a gym here [I should have mentioned before, I suppose, that it would be impossible to run here. It’s not that I feel in anyway threatened or unsafe, like I would be mugged or something. Rather, I just can’t conceive of WHERE I would go–at least in the places I have been there isn’t much open green space. In addition, there’s not a sliver of a space on the street, either–so even if I had a destination in mind, I don’t know how I would get there without getting run-over by a touk/bicycle rickshaw/motorcycle, etc. AND, it is hot and humid, especially now that I have come so far south to Chennai–I can’t imagine trying to run in the modest gear that would be necessary: running shorts and a running bra just wouldn’t work, I’m afraid! All that makes a hotel gym a very precious commodity.]. This one is actually on the top floor of the hotel, and has a lovely view of the whole city, including a rooftop lap pool–Maria, I thought of you right away! 🙂 Third, they have complementary bottled water [which I ALSO sterilize–back to the belt-and-suspenders thing] and a really great Indian buffet for breakfast, as well as several good options for dinner. So, I have exhaled somewhat–you know how when you relax and suddenly realized you were stressed before, only you were right in the midst of it and didn’t realize it? That’s kind of how I feel.

Another big reason for the sigh of relief and the wider smile is that after 10 days or so of traveling by myself, I am meeting some friends here, which is just a lovely feeling. Today, in fact, I spent the afternoon with Dr. Monica Melanchthon, a professor of Old Testament at Gurukul Lutheran Theological College [check it out at http://www.gltc.edu]. She did her doctorate at the Lutheran School of Theology in Chicago and she writes very powerfully and persuasively from a feminist/liberationist perspective. A Dalit herself, she brings a critique of economic/societal power, gender roles, and the important of context to her study of the Hebrew Scriptures–her stuff is amazing! Anyway, we know each other from Dialog, primarily, although our paths have crossed multiple times in multiple places for many years now, so it was really, really great to be here and meet her in her home. We toured a few neat sites in the city–more about that in a minute–and we did some shopping! [Nice to have a local to show me where some good shops were for Indian items, and especially nice just to have friend to shop with: “Oh, it looks great–go ahead and get it!” Why doesn’t my husband ever say that?!] I will be spending more time at Gurukul tomorrow, so I will say more about the school, and some of the students, in my blog, then: this is their last week of classes, and the seniors are organizing a worship service tomorrow night and then hosting a dinner, to which I am invited. So, I am looking forward to seeing the school and talking to some of their soon-to-be-graduates!

So, our first stop today, which was also the most interesting was the San Thome Church, the site of St. Thomas’ grave. [They take great pride here in being one of only three churches in the world built over the grave of an apostle: St. Peter’s in Rome and St. James in Compostela.] I also went to the little church marking the spot where he was actually martyred–it is called “St. Thomas Mount.” Both churches have relics, of course: on display at St. Thomas Mount Church was a shard of a finger bone and a toe bone–I don’t mean to giggle, especially when surrounded by worshippers of deep piety, but I just can’t help it. I mean, a toe bone?! [I did refrain from outright guffawing, however.] Also on display there was picture of Mary that is said to have been painted by St. Luke–I have included pictures of both of those things. What was particularly cool, I thought, was a statue titled “Our Lady of Expectation,” and she was both crowned Queen of Heaven, which I have seen a hundred times before, and also PREGNANT, and somehow, that was new to me, at least in that particular pose. Look at the picture and judge for yourself. Finally, I am also including a couple pictures of the hunkiest, dreamiest disciples you have ever seen–all twelve images look like this, and they are in the basilica. There, I did give in to outright guffawing. I mean, they could have been ripped from the cover of the latest harlequin romance. Again, take a look and judge for yourself.

I want to note here also, that Monica was telling me that one of the key differences between the Catholic Church and Protestant Churches here is the fact that the Catholic Church, as a whole, is really much more indigenized–that is, they have embraced more cultural [read: Hindu] elements of worship, iconography, etc. So, especially with images of Mary, you see her wearing garlands and jewels like any good self-respecting Hindu goddess–and sometimes even dressed in saris. Note the image of the crucified Jesus below, whose feet are on a lotus, flanked by two peacocks–very common in Hindu iconography as well. We talked about it a bit–Monica recognizes that is serves a need for the people, and clearly is something they can relate to, but she wonders if it doesn’t blur boundaries unhelpfully: for example, she said sometimes you will Hindus coming to a church to worship and/or make an offering to Jesus and/or Mary. What to make of that?

OK–that is enough for now, I think. The pink temple in the pictures below is the Ramakrishna Mutt Temple, which honors not only Ramakrishna himself, but a variety of gurus in the Ramakrishna tradition. It’s not Hindu, exactly–they welcome all religious traditions [as evidenced by the different religious symbols for Christianity, Islam, Buddhism, Hinduism etc. carved on the main temple doors], but the movement certainly has been primarily influenced by Hinduism. More tomorrow! 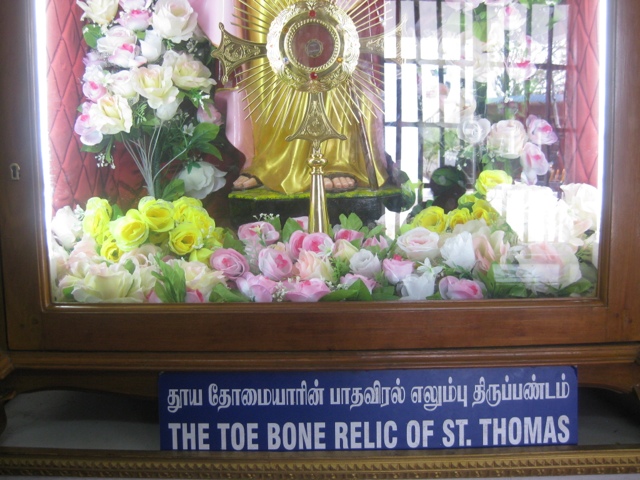 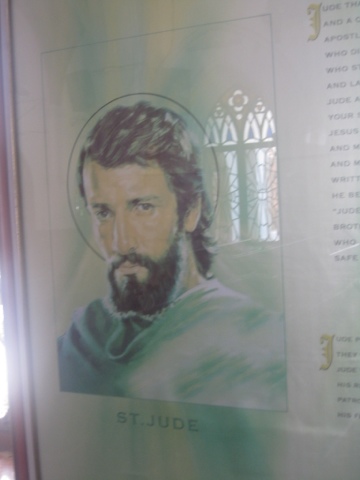 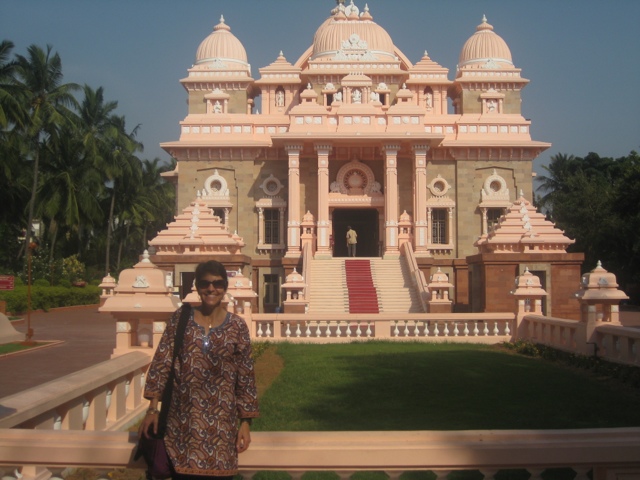 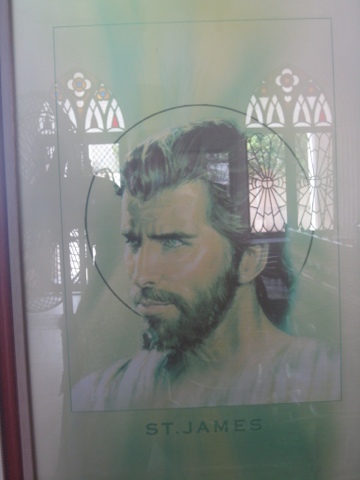 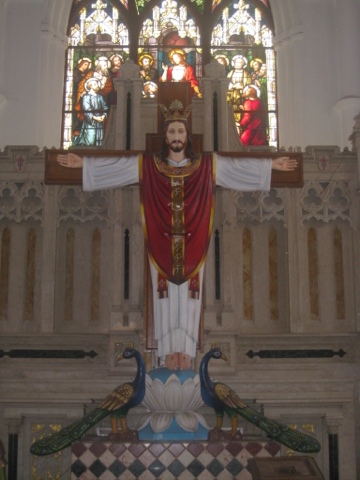 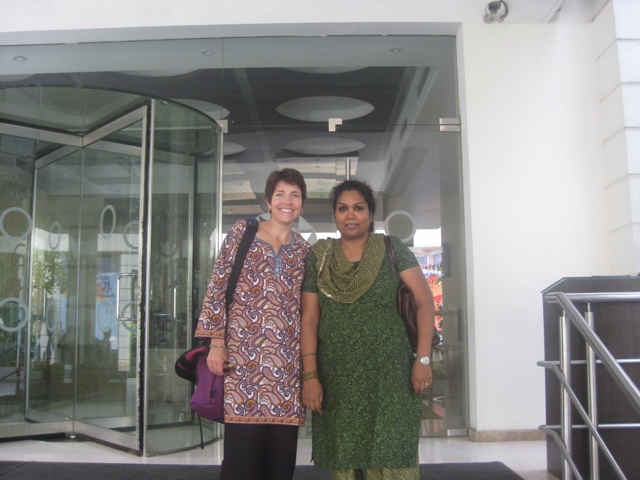 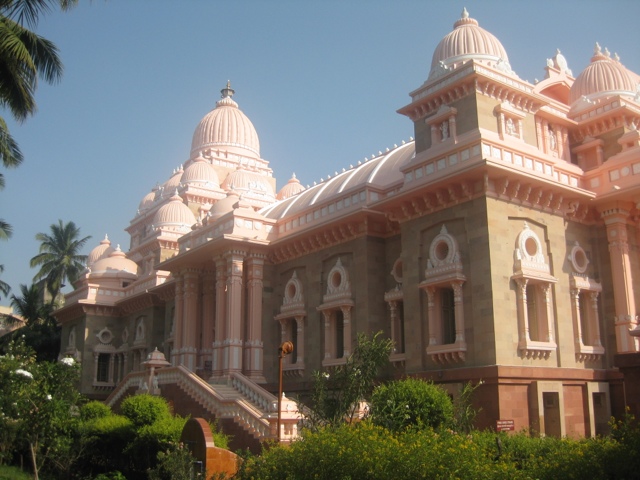 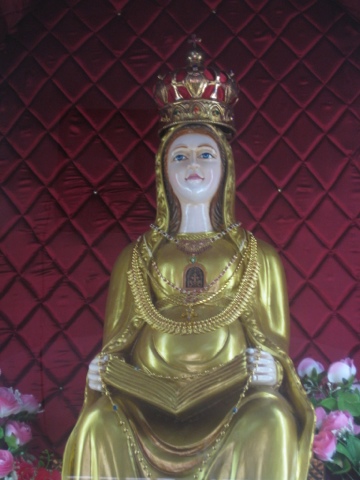 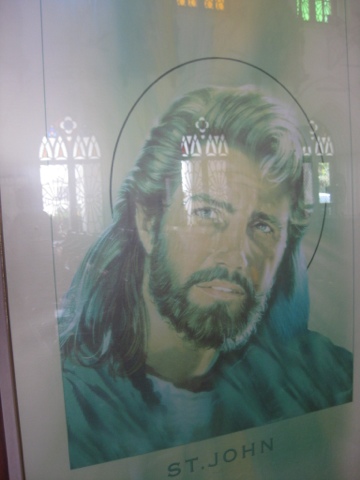 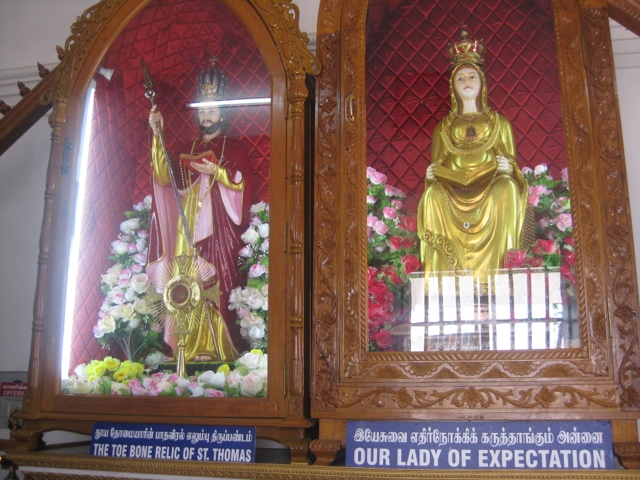 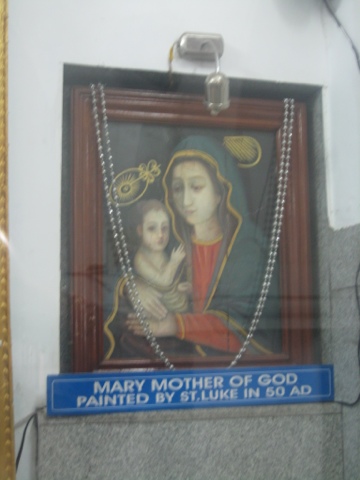 One thought on “Feeling Good in Chennai!”