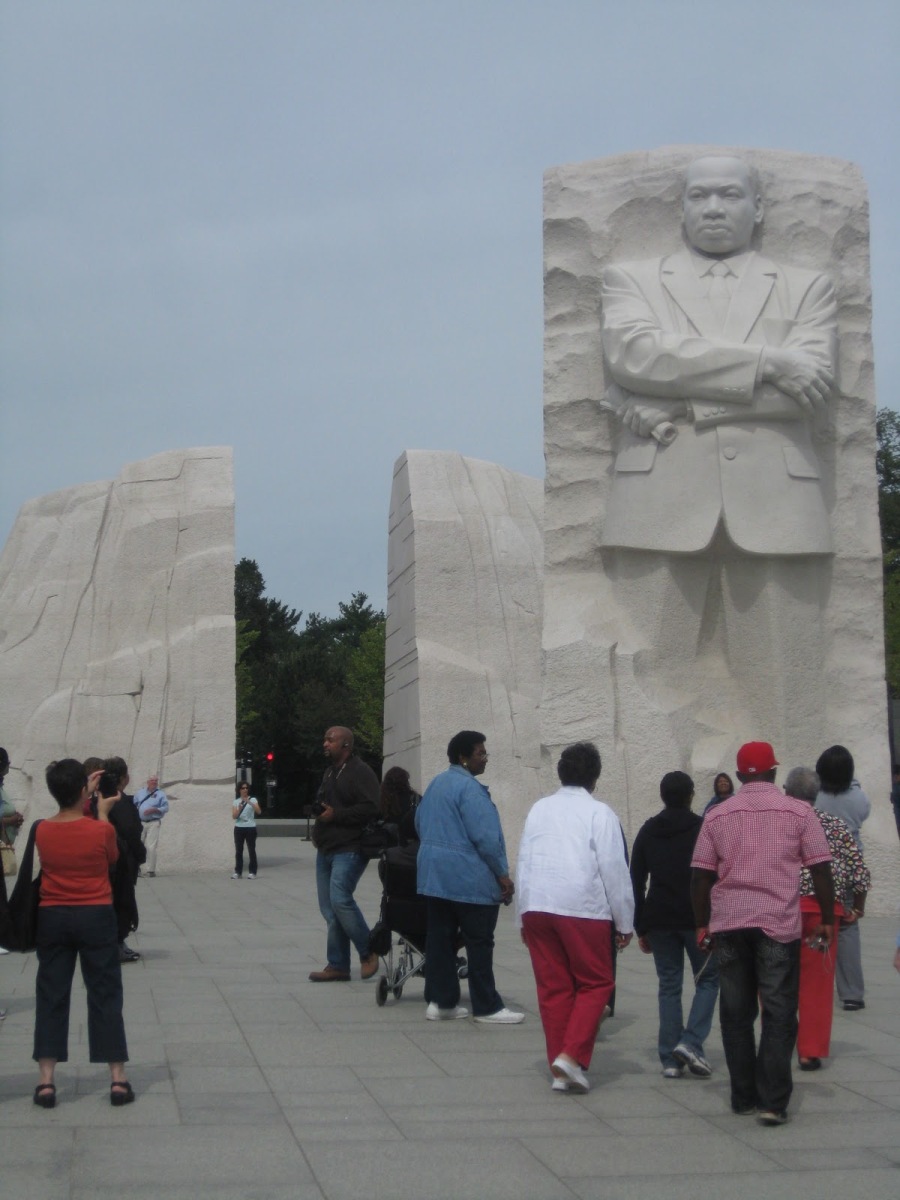 We are only a few weeks into the Ethics course and we already have identified one major theological issue that makes discussing and describing ethics from a Lutheran perspective difficult:  I’ll call it the “but.”  Lutherans know that a faithful response to God’s grace includes ethical behavior; Lutherans know that we are empowered by Christ to do good works for the sake of our neighbor; and Lutherans know that a good tree just naturally bears good fruit.  This is the “yes” we offer in response to all God has done for us.  However, anytime Lutherans attempt to explain statements like these, anytime Lutherans begin to turn to the difficult topic of life in the world, we almost immediately follow all such statements with the “but” of sin, dampening and diminishing any foolish optimism one might have about human potential for good in the world with a reminder of sin’s terrible pervasiveness.   This “but” acknowledges the dark specter of sin and evil that looms ominously and conclusively over all aspects of human existence, which perverts and depraves even the best of human intentions and actions.

As such, then, this “but” is of great theological importance for Lutherans, as it reminds us to be very cautious about human progress, to be very honest about human limitations, and to interpret our own actions with a large dose of humility at all times.  While these are good practices in general, they have a downside, too.  The primary drawback to this “but” of sin is that it can lead to quietism, to giving up, to surrendering  altogether the possibility of making positive change in the world, and simply ceding the ethical playing field to others.  It’s not surprising really:  when faced with the insidious flow of sin and evil that courses its way through all aspects of human society, it’s no wonder many Lutherans throw up their hands and simply turn away.

That’s not how I am feeling today, however.  Today, I am inspired.  A visit to Washington DC with John and little Henry has given me a fresh perspective, which, while not dispelling the gloomy cloudy of sin altogether, has reminded me anew of the importance of not letting that cloud depress me to the point of inaction.  The “but” of sin may be powerful, but the “yes” response to God’s gracious action and inspiration is stronger:  the “yes” of change, the “yes” of hope, the “yes” of determination.
The first moment of inspiration came during a visit to the new Martin Luther King, Jr. monument on the National Mall.  It was an amazing experience—not least because of the many, many visitors, young and old, vying to have their picture taken with the enormous image of Dr. King standing strong and tall behind them.  In particular, I watched three older African American women in wheelchairs, being pushed slowly around the exhibit, who insisted on having their picture taken with their hands on the monument itself.  I wondered what they were thinking, what they were feeling.  To say I was moved would be an understatement. 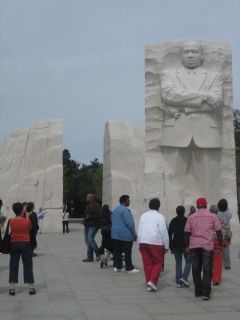 If you have read anything about the design, you know that the artist intended for the statue of King himself to be approached through two enormous stone peaks, symbolizing an immovable wall of despair, the kind one faces when challenging systematic injustice.  The stone into which King is carved, and out of which he emerges, looks as though it has broken through those mountains, creating a way where there was no way before.  To emphasize the point, on one side of King’s stone are carved these words:  “Out of the mountain of despair, a stone of hope.”  On either side of the peaks, a wall stretches out, bearing the inscriptions of a variety of King quotes, including one of my favorites:  “Darkness cannot drive out darkness, only light can do that.  Hate cannot drive out hate, only love can do that.”  Surely here is a man who knew the power of sin, but never stopped saying “yes.” 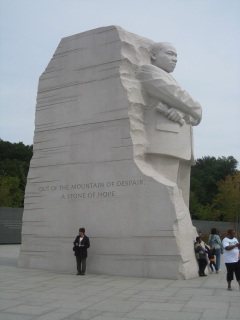 The second moment of inspiration came as we left Arlington cemetery, and paused at the SeeBees monument at the end of the drive.  If you don’t know, the SeeBees are the Construction Battalions (CBs) of the Navy, and their motto is one of my very favorites:  “With willing hearts and skillful hands, the difficult we do at once, the impossible takes a bit longer.”  It is this last bit that I love—this defiant “can do” optimism that insists on seeing possibilities where none seem to exist, and maintaining that constructive action is conceivable, even in the face of overwhelming challenges.  Surely here is a fitting response to a God who continues to say “yes” to us, and coaxes us to reply with a robust “yes” ourselves.

So, for now at least, I’m thinking of trying a little more “yes,” and a little less “but.”  Sin shouldn’t have the last word with us; we know it doesn’t with God.