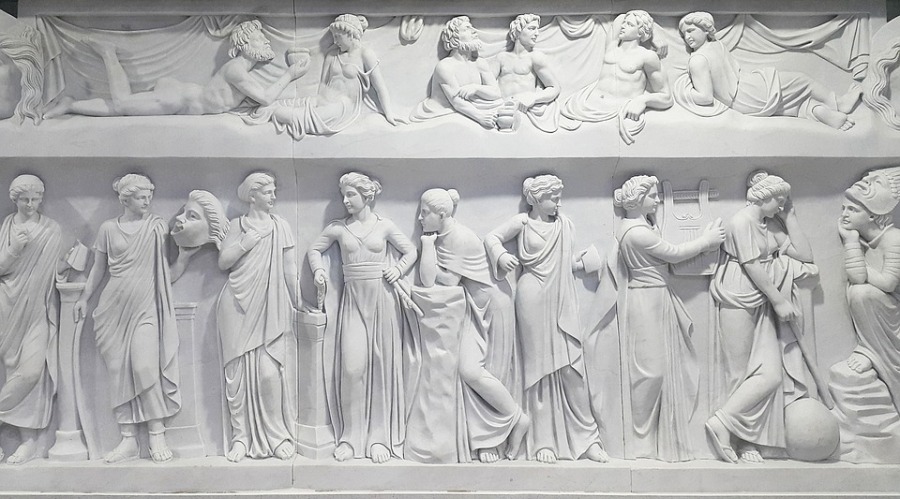 If you are my age, give or take 10 years either way, and you loved Greek mythology growing up, you definitely have heard of Edith Hamilton. Well, maybe you haven’t heard of her exactly, but you certainly know her book, Mythology: Timeless Tales of Gods and Heroes, her retelling of many popular Greek myths. First published in 1942, it has been a continual best seller through the decades, selling millions of copies around the world. [I checked on Amazon and the latest edition is the 75th anniversary edition.]

I can’t really count how many times I have read it over the years, and each time, I was thrilled with how she transported me to an exciting, dramatic world filled with characters who are tragic, brave, capricious, impulsive, and absolutely unforgettable.

I didn’t know anything about Edith Hamilton, of course, but I just assumed she was a scholar of ancient Greece and had probably visited the country many times.  So imagine my surprise, listening to The Writer’s Almanac last Wednesday, August 12th, her birthday, to find out out that while the former was true–she was a scholar who knew ancient Greek literature very well–throughout her career teaching and writing on Greek culture and literature she had never actually visited Greece itself. It wasn’t until 1957, when she was 90 years old and made an honorary citizen of Athens, that she visited Greece for the first time in her life.  It was the first of several trips she made in her 90s. [You can listen to the episode here: http://www.garrisonkeillor.com/radio/twa-the-writers-almanac-for-august-12-2020/]

I have been thinking about this for the past few days, and there are several parts of that story that I find very heartening and encouraging. The first is how she developed such a passion for a country and a culture she had never physically seen through her study of its literature and language.  The second thing is the endurance of her affection, decades and decades and decades, lasting an entire lifetime and beginning from her first Greek lessons with her father at a young age.

But mostly I think I am encouraged by the thought of what is possible at 90 years old: the embracing of a new experience, the welcoming of a new challenge, and perhaps even the fulfillment of long-held dreams. Life certainly can be cut too short–we have seen enough of that these past months–but life also can be long, and it is heartening to think that at no point do possibilities entirely shut down, at no point do all doors close. And while certainly I understand that illness and age do take their toll, and not all types of possibilities are available to everyone in the same way, still, for most us, some doors remain open.

So, it seems that at least for some, 90 is a great age for a grand adventure. But why wait? Any age will suffice. The world is big, and opportunities for new experiences and new adventures are everywhere–like, I don’t know, starting a new academic year in the midst of a pandemic.  I’m trying to face it like I imagine Edith Hamilton faced that first encounter with Greece: the complicated travel arrangements, the planning, the packing, the preparation–all leading up to that moment of  stepping out of the airport onto a beloved land she had so often pictured in her mind and described in her books. It’s not a bad image to cling to, I think, as we find ourselves in uncharted waters. If she could embrace a new thing at 90, we should be able to do so now, too.

One thought on “Facing New Challenges like a 90 year-old”