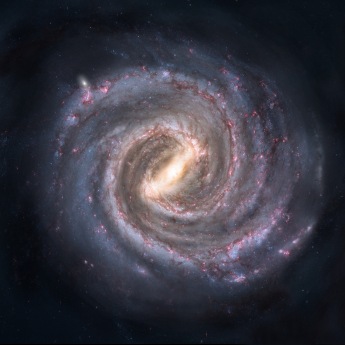 I got to preach the Christmas Day service at the Seminary; I love preaching on John 1, and I love that service–it is always full of such joy.  Here’s the sermon, with some science thrown in as well–I hope you like it.

Last night, in congregations and homes all around the world, the creche was completed. The infant Jesus was laid in the manger, and we sang of the holy, silent night when Emmanuel, God-with-us, was born.

This morning, then, as we gather together, still basking in the afterglow of that wondrous revelation, we would be excused for supposing that that was it—the high point of our celebration.

But, glory be, we are still on the upside of the liturgical slope, as this morning, John has yet more to reveal to us about the incarnation.  Because unlike Luke—or Matthew for that matter— where the camera zooms in tight on the intimate, mean setting of Jesus’ birth, John zooms out, and invites us to see the incarnation not in its human specificity, but in its cosmic universality.

John emphasizes for us that God did not just—“just”—become human, God became flesh.  The logos became sarx. And in that declaration, John reveals to us the soteriological implications of this act for the entire created world, and challenges our human exceptionalism with a vision of humanity deeply embedded in the whole of creation.

This one little Greek word, sarx, reveals God’s profound love for the entire created universe, and not just derivatively, secondarily, as an add-on to humanity.  The fact is, in Jesus, God does not choose to bind herself to human beings only. She also nests herself permanently and definitively in the whole of the world, uniting her very being with that of the cosmos.

And, despite all you hear about the “war” between faith and science, this is actually one place where our Christian confession is wondrously supported and enhanced by what science tells us about creation, and the complex networks that interlock all being.  Let’s start with evolution.

Before any life existed on earth at all—let’s say, “in the beginning,” the simple chemicals in the primordial muck produced the amino acids and nucleotides that developed into the proteins and nucleic acids that themselves developed into single cells—the foundation of everything that exists today:  canyons, seas, ferns, mollusks, camels, people. The sodium, calcium and clay that are found in the Pennsylvania Mountains and the California sequoias are also found in us; humans and mountains and trees share the same origin story—we’re part of the same biological family.

Genetic science tells a similar story.  All human beings are 99.9% identical in their genetic make-up—we know that; we share 96% of our genes with chimpanzees—we know that, too.  But did you know that humans also share 60% of our genes with bananas?  [There’s some fine print there, but it’s not wrong.]  Fruit flies, mice, potatoes—we share genes with all living things, because all life that exists evolved from those same first cells; and in that sense, we are all relatives.

Now, don’t get me wrong, I always love when science shows up in a sermon, but for the proclamation of the gospel, science isn’t enough. Instead, for me, all this talk about genes and cosmic soup is simply the foundation for the larger theological truth here, and that is the varied, vast family that God makes of the whole world in the incarnation. Every human being, surely, but the reach of God’s family does not end there.  It stretches wider, to the domestic animals with whom we share our homes, to the rather mundane bluebirds, squirrels, heron, and deer who live around us and keep a watchful eye on our movements from a safe distance.  And wider still to the hippos, the baobabs, the mangroves and the cobras. And this is all without even mentioning the beetles and fish and aspen and moss. I mean, how long do you want to be here? I could do this all day.

Our hymn of the day [“Cold December Flies Away”] suggests this reach, too, I think, as it invites us to experience God not just in the touch of an infant’s hand, but in the golden light of the rising sun; not just in the sound of the angels’ proclamation of the good news, but in the sight of a budding tree and the sweet smell of a flower’s fragrance.  The incarnation engages all our senses, and reminds us that God comes to us not only in this one child, but in him throughout the entire cosmos, in the ordinary experiences of our everyday lives.  God’s presence makes the whole world a fragrant garden of love.

It’s a both/and, of course:  the tender intimacy of Christmas Eve and the lavish expanse of Christmas Day.  Each informs the other, and together they paint a picture of a God who loves us with amazing depth and intensity, and who makes of this miraculous blue planet one cosmic family.  The good news doesn’t get any better than that.  Merry Christmas.  AMEN.

3 thoughts on “The Incarnation & The Cosmos”