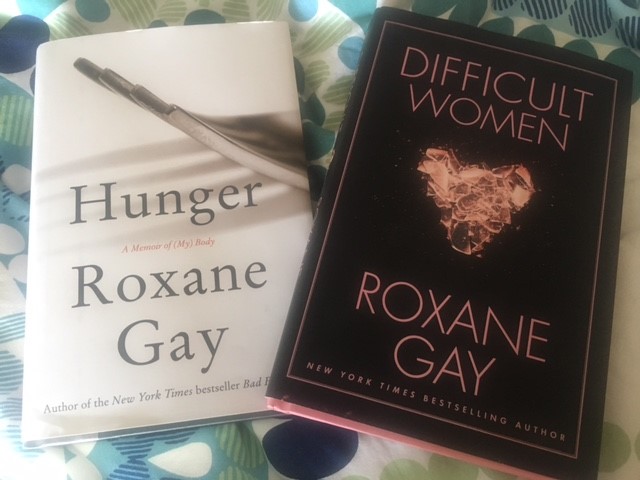 One of the best parts of vacation is the extra time I have for pleasure reading; and this trip I brought along two books by Roxane Gay.  It isn’t quite right to call reading them “pleasure”–they both were hard to read, especially Hunger, but they both were definitely worth the time and effort.

Mostly I want to talk about Hunger–as the subtitle states, it is “A Memoir of (My) Body,” more specifically, the fat body (her words) she has deliberately and intentionally created over time in order to protect her from the experience/memory/trauma of being gang-raped at age 12.  So, the “hunger” of the title is literal, but even more, it is figurative:  she hungers for many, many things, of which food is by no means the most important.  This brief paragraph at the end of the book really sums up the whole:  “When I was twelve years old I was raped and then I ate and ate and ate to build my body into a fortress.  I was a mess and then I grew up and away from that terrible day and became a different kind of mess–a woman doing the best she can to love well and be loved well, to live well and be human and good” (302).

I am not overweight, but I certainly could relate to many things that she said.  She talked about how fat bodies are the subject of public discourse, but I think this is true in many ways for women’s bodies in general:  all the time, every day, in every situation, our bodies are observed, evaluated and we are judged in toto solely on their appearance.  Men do this to women, and we do it to each other, too.  [Our president does this regularly as well, including just yesterday to the First Lady of France.]

Gay also talked about her first day of teaching.  She said, “What I feared was my appearance and what [the students] would think of me.  I worried that if they didn’t like me, they would make fun of me, mocking my weight, and I was not all sure how to make them like me when I felt so very unlikable, and always had.”  I admit that I worry about my appearance, too, in the classroom; and I feel somehow that my intellect isn’t enough.  Do men worry about their appearance when they walk into a classroom for the first time, or are they able to trust their wisdom, and their power?  I had many male professors who seemed to relish in their complete indifference to their appearance–and they never were suffered for it; they weren’t judged negatively.  Instead, it was almost a badge of honor for these “men of the mind.” I don’t think women have that same luxury.

Finally, and I guess this is the most important point, I think women struggle constantly between not wanting to be defined by our bodies–and we separate our “selves” from our “bodies” in this effort–and knowing that, in some fundamental way, we are our bodies, and our bodies are integral to who we are:  we cannot love ourselves fully if we don’t love our bodies.  When are bodies are broken, we are broken; and we cannot simply detach ourselves from that brokenness and move on.  As she says, you have to have a humane relationship with your body.

I feel like the collection of short stories (fiction, but many of them clearly are based on her own experiences), Difficult Women, all point to that truth as well–the desperate need we all have for “humane relationships,” with ourselves (our bodies), and with others.  (And, in case you are wondering, those stories are mostly bleak, too–personally, I would have titled it Asshole Men; the difficulties the women have in the stories are mostly related to abusive and neglectful men.)

Let me just end by saying that both books raise really important issues that most women wrestle with on a regular basis, especially women who have been abused, especially women who have been raped.  She pulls no punches in describing her deep, powerful feelings of shame, and the grief that comes with feeling that one is no longer a “good girl,” an ideal around which so many of us have been trained to build our identities.  In her head, she knows that this shame, this guilt isn’t fair, it isn’t right, but in her heart, it is a different story.  Who can’t relate to that?

In this context, she also says, “I’m attracted to the idea that the mind, the soul, can heal as neatly as bones.  That if they are properly set for a given period of time, they will regain their original strength.  Healing is not that simple.  It never is.” Gay’s story, ultimately, is one of healing–almost in spite of herself.  And for that alone, it is inspiring.  I’m looking forward to using Hunger in my college course this fall; it is going to stay with me for awhile.